'It makes me feel good about myself that I am helping children like me around the world.' 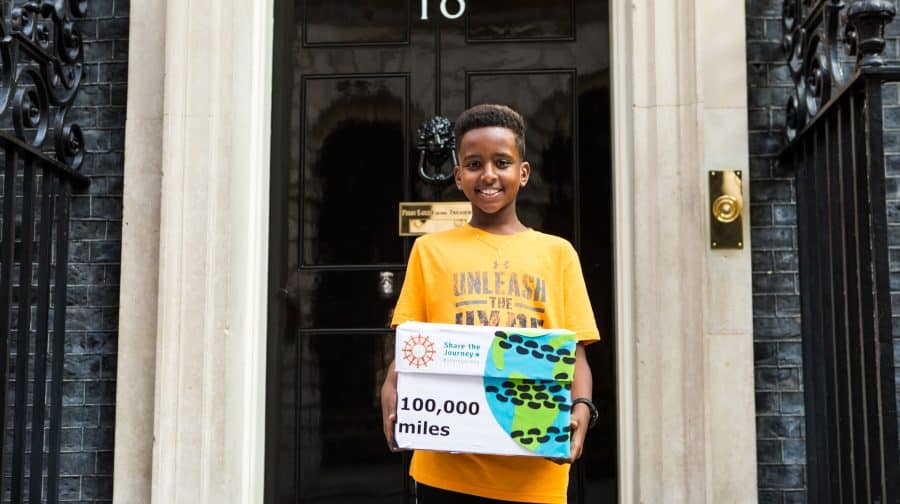 Abel, a ten-year-old from Bermondsey, stands at Number 10 as he hands in the petition in support of refugees Image: Thom Flint

A Bermondsey boy, aged just ten, went to Downing Street to hand in a petition supporting refugees and migrants.

Abel was part of a delegation to hand in a petition signed by Catholics across England and Wales as part of the Share the Journey campaign, launched by Pope Francis last year.

The campaign calls for world leaders to take action to protect refugees and migrants at UN summit talks this month.

Abel said: “It makes me feel good about myself that I am helping children like me around the world.  I felt like going to Downing Street was a big opportunity for me.

“I will be proud of myself when I see this in the future.

“I hope the UK government will listen to us and do more to protect refugees and migrants.”

The ten-year-old’s proud mum, Belay Nema, added: “I got a bit emotional watching him give interviews after his trip to Downing Street. We are very proud of him. He was a star!

“It is clear that each of us had at some point been newcomers to a county, city and community. As an immigrant myself, I was once a stranger in this county and kind people made me welcome.

She added: “I never had to face the situation that the current refugees face, neither did I need to migrate economically, but I understand the loneliness of separation from those you love.”

As part of the campaign, supporters including Abel were asked to walk a collective 24,900 miles – the distance around the world.

Head of campaigns for CAFOD – one of the groups backing the campaign – Daniel Hale added: “The enormous support from the Catholic community for the UK government to ask World leaders to develop a united, humane and dignified response to the refugee and migrant crisis, shows it is time for all to take action.

“It is important to remember that most people on the move are from poor countries, and most seek safety in nearby poor countries or within their own country’s borders.”