Bermondsey boy Harvey gets hospital visit from his Millwall hero

Nine-year-old Harvey, who suffers from the rare Morquio syndrome, was in hospital for a knee operation to help him walk better 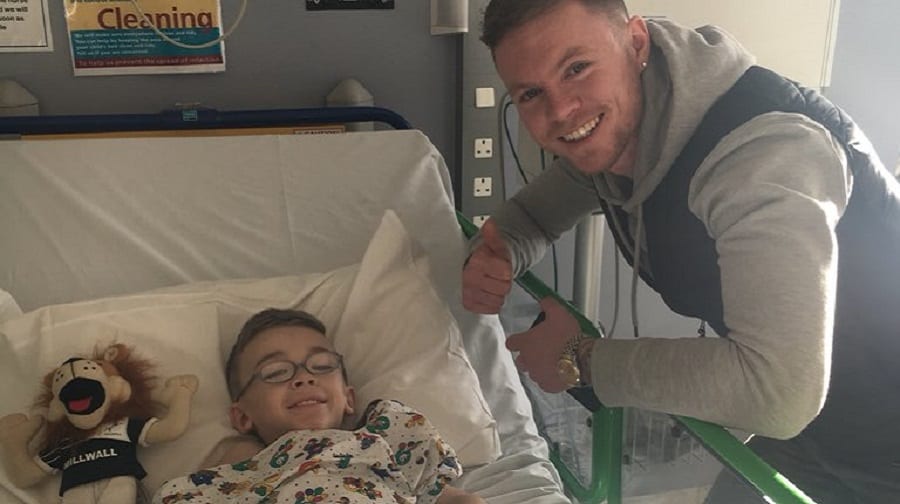 Bermondsey boy Harvey Brown got a surprise visit from his Millwall hero in hospital while recovering from a knee operation which should give him a “better lease of life”.

The life-long Millwall fan – who turned nine earlier this month – suffers from the rare Morquio syndrome which causes him to have “knock-knee”, among other things.

It means Harvey’s skeleton will not develop properly; his organs will continue to grow but his weak bones will not and he is likely to develop heart disease and breathing difficulties, and have problems with his vision and hearing.

An operation three years ago saw metal plates put in Harvey’s knees to help straighten his legs out and stop them from rubbing together so he can walk easier.

The youngster had the plates removed from his left knee during an operation at Great Ormond Street Hospital on Friday since his left leg has successfully straightened, but his right knee still needs more time.

Harvey is now at home resting but his family has noticed a difference in how tall he is and how far he can walk.

“He couldn’t walk that far before – he could only walk about two yards and would have to be carried and he has a wheelchair which he doesn’t rely on but uses when he’s tired,” said his 48-year-old dad, Dean.

“He obviously can’t do what other kids can do but we’ve noticed he can do a lot more and he has got a lot taller with it. He loves football so he plays more football now.

“In six months hopefully the right one will be in the right direction and he will have another operation to take the plates out.”

A visit from Harvey’s favourite Millwall player, Aiden O’Brien, and a video wishing him to get well soon from his teacher and classmates are said to have lifted the youngster’s spirits while he was in hospital.

“His favourite player used to be Fred Onyedinma but is now Aiden O’Brien and you can see the special bond between the two of them,” said Dean.

“I messaged him just to ask if he could come round our home once Harvey was out of hospital but he turned up at the hospital on his own on Friday, which I wasn’t expecting.

“He walked in with a big smile on his face and it really did lift Harvey.

“Harvey’s teacher and classmates also sent him a video and that cheered him up as well – they’ve been brilliant.”