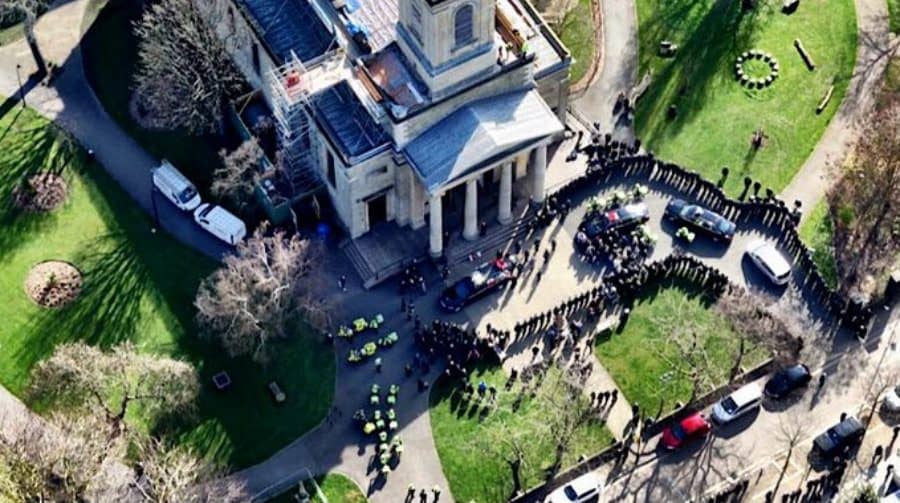 An aerial photo of the funeral at St James and St Anne in Bermondsey (photo: London Air Ambulance)

A London Ambulance Service cycle responder who loved Millwall and Manze’s pie and mash was laid to rest in Bermondsey yesterday after dying suddenly.

His funeral took place on March 31 at St James and St Anne’s church, where LAS members formed a guard of honour and the London Air Ambulance helicopter performed a fly-by.

Following the service, his former colleagues went for a meal at Manze’s in Tower Bridge Road, where he was a popular patron.

LAS Chief Executive Dr Fionna Moore said: “Our thoughts are with Brian’s family and his many colleagues at this very sad time. Brian was a big part of London Ambulance Service for many years and was much loved by all who worked with him.

“He was a fantastic ambassador for the Service and his innovative booze bus idea helped to free up frontline ambulances for patients in a serious or life-threatening condition.

“Brian was a big personality and will be sadly missed by all those who knew him.”

Brian, who lived in Kennington, was a die-hard Millwall fan and volunteered with the club’s academy. He was a former soldier and led the march past the Cenotaph to mark Remembrance Day on behalf of the LAS for many years.

He also played a key role during the Olympic Games as a manager at the LAS’s ‘Olympic Deployment Centre.’

Brian was survived by his wife Claire and three children.

It surprises me that someone in a responsible job follows, sheep like, ridiculous fashions: does the guy outside Manzes realise what a tit he looks, with that ridiculous beard?