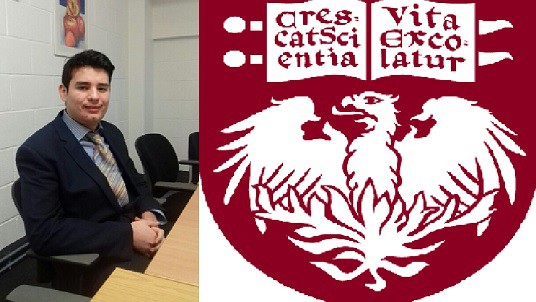 A St Thomas the Apostle College (STAC) student has beaten off the best of the best to land a scholarship to a top US university.

Emanuele Guidi, eighteen, will study Molecular Engineering at the prestigious University of Chicago (UoC) after he finishes his A- levels in the summer.

He was supported through the admissions process by the Sutton Trust’s US Programme, which encourages academically talented low and middle income British students to consider studying at American universities.

The South Bermondsey boy, who’s studying seven A-levels, will be awarded $81,000 from the institution to undertake his studies there.

“I’m really excited,” said Emanuele. “Nervous – but excited. It’ll be an interesting time to go there in terms of politics, too – with the new president, I expect there’ll be lots of student activism. Which I plan to be a part of!”

Following a gruelling admissions process which included three exams, four essays and an interview, Emanuele was offered a place in October. In December he found out he’d secured the scholarship. “I didn’t expect to get the place. It’s so competitive. They only have space for a total of one hundred international students,” he said.

Emanuele is predicted seven A*s in his A-levels, which include Maths, Further Maths and Advanced Further Maths.

When he graduates, he hopes to secure a job in a related field, such as cancer research.

Deputy Head of Sixth Form at STAC, Ms. Clare Rodin, said: “We are incredibly proud of how well he has done. The aim of our sixth form is to ensure pupils make the right future choices for them and to prepare them to achieve to the best of their ability. This is exactly that happening.”