Bermondsey business, which catered for boxing legends such as Frank Bruno, could be priced out of the area 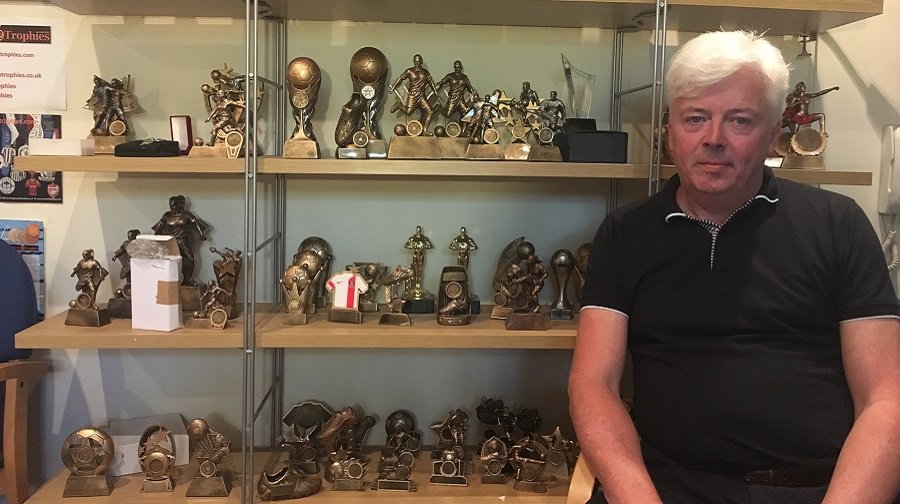 Marc Cowcher, managing director of Munich 72 Trophies in Bermondsey, fears the business may be priced out of the area after being served notice on his lease

A Bermondsey business, which has catered for well-known boxers including Frank Bruno, could be forced out of the area after more than 40 years.

Atkins named the shop as a mark of respect for two of his friends who represented Great Britain in the Munich 72 Olympics.

It was run as a traditional sports shop with a trophy and engraving section upstairs, and supplied the kit for professional boxers such as Bruno and Lloyd Honeyghan.

During its heyday a second shop was opened in Dartford in the late 70s, and people would flock to the store in Bermondsey to have their photo taken with famous faces.

Speaking to the News, Marc Cowcher, 56, who now runs the business, said: “The Title Boxing was really what brought people in.

“Frank Bruno used to come into the shop to buy his shorts for his fights.

“The boxers would come in, we would measure them up and they would have these wild nicknames on their shorts that we had to get perfectly right.

“They would train at the Thomas A Becket pub on Old Kent Road and we would supply their kit.

“Those were good times, meeting all those guys – everyone wanted to come in and have their photo taken.” Marc Cowcher, managing director of Munich 72 Trophies in Bermondsey, fears the business may be priced out of the area after being served notice on his lease

The store in Dartford closed in the early 80s and the business became known as Munich 72 Trophies, which Marc took over in 1990.

In 1994 the sports section closed down suddenly and the business moved to a different premises on Southwark Park Road.

“I think those massive stores like JD Sports opened and it was difficult for a small shop to operate,” said Marc, who has worked for Munich 72 in some capacity for 40 years.

“We just couldn’t compete anymore; we would be buying stuff in probably for more expense than JD and they were buying it in such massive volumes.”

While once upon a time Marc could have made a business solely out of trophies and engravings for dart and pool leagues, 50 per cent of what he does now is merchandise for customers such as football clubs.

The businessman is now looking for a new home in Bermondsey after being served notice on his lease in Bombay Street, where he moved the shop to sixteen years ago, but he fears he might be forced out of the area as rents are “sky high”.

“The business is doing really well, it’s really strong but you just don’t know how moving is going to have an impact and we’re talking mortgages and livelihoods,” he said.

“I think we could narrow down the operation and put it partly in the Biscuit Factory in a smaller office or studio and have some of the work done in a workshop elsewhere.

“We moved 50 yards from above what’s now the Nisa on Southwark Park Road round to Bombay Street and we had a big sign saying we had moved but people still thought we had closed down so it is a concern.”

To find out more about Munich 72 Trophies, visit www.munich72trophies.com

Southwark NewsNewsBermondsey business, which catered for boxing legends such as Frank Bruno, could be priced out of the area