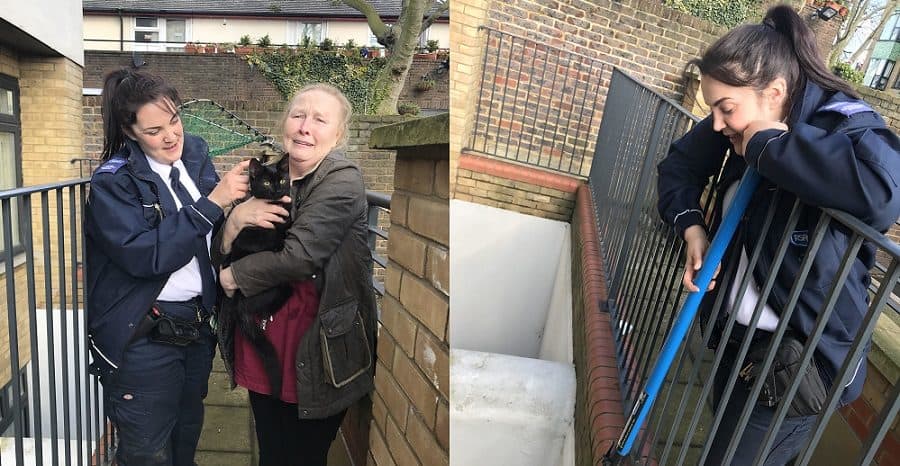 A Bermondsey cat is feline much better after being rescued from a ten-foot lightwell.

Pops, a ten-month-old black cat, had been missing from his home for six days, turning his owner Sharon Suleyman sick with worry.

On Thursday, March 5, a member of the public heard Pop’s miaowing from the lightwell of a basement flat in Willow Walk.

When they went past the next day, they realised Pops was trapped ten feet down – and called the RSPCA for help. “As I was reaching down to check the microchip for Pops, one of his neighbours came over to see what was happening and recognised him,” she said.

“They went off to go and tell Sharon we had found her missing cat. She was absolutely overjoyed.

“Using a net and a reach and rescue pole, I managed to bring Pops to safety and reunite him with his owner. I was so pleased to be able to reunite Pops with Sharon. We all love a happy ending!”

His owner had even walked past the house where he was trapped unawares in her desperate bid to find her beloved cat. “I’m so pleased to have him home and he is really happy to be home,” she said.

“He keeps excitedly running round the house. He doesn’t seem to want to wander as far now either, I think it’s scared him, so hopefully he won’t have another little adventure anytime soon.

“He was quite skinny but in fairly good condition considering and he’s put the weight back on now.”

Sharon rescued Pops in Ireland where he had been abandoned as a young kitten. He had been found outside a friend’s house – and Sharon spent thousands in vets’ fees to bring him to the UK.