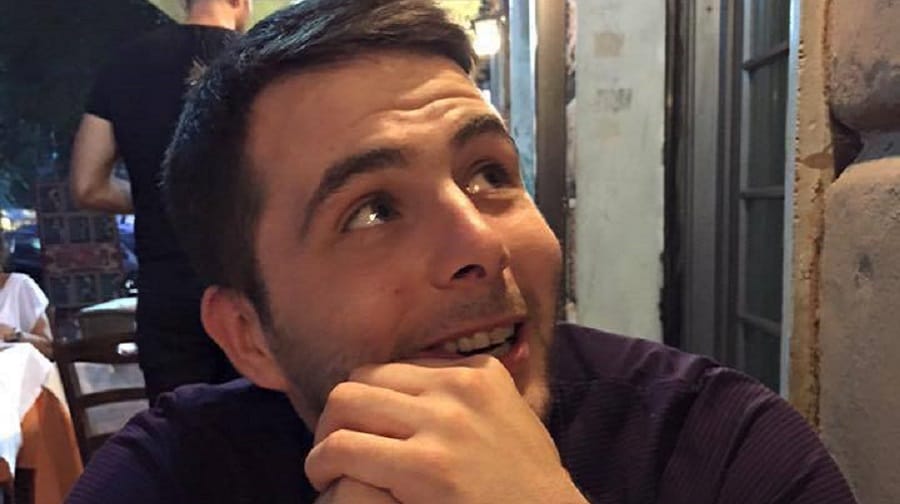 Pictured: Sean Tierney, who helped save the life of a driver involved in a serious crash in Bermondsey

A charity worker saved a critically-injured man’s life after dragging him away from a car as it burst into flames.

Last week, the News reported the story of how Tesco worker Theresa Hancock blocked off Galleywall Road to protect people from a car engulfed by flames after a crash.

Since then, Bermondsey resident Sean Tierney has told of how he and a friend were just metres away from the crash when it happened.

The 31-year-old said he was walking his dog with a friend when a white BMW and bus crashed just ten metres from where he was stood in Galleywall Road.

Quick-thinking Sean, who works for charity Street Buddies, left his dog with his friend and raced over to the car to help the passenger and driver.

“We were just by the café [Los Dos Amigos] and a tree was actually blocking our view but I heard a really loud bang,” said Sean, who lives on Lynton Road.

“When I first heard it I honestly thought someone had thrown something heavy from the third or fourth floor of the block next to it. I looked round and my mate kind of froze on the spot.

“I ran over and tried to pull open the passenger door – I put my arm through the smashed window and pushed the air bag out the way to see who was in there.

“That’s when I saw the passenger climbing over to the driver side because his door wouldn’t open and then my mate spotted the driver against the wall.

“I saw another man in a grey T-shirt helping the bus driver get out and I ran over to the driver and that’s when I saw straight away the critical state he was in.”

Pictures showing the aftermath of the crash in Galleywall Road (Credit: Theresa Hancock)

Sean said it looked as though the driver had been “flung outside the driver’s door” and that he was lying against a wall unconscious.

“He was bleeding heavily from the back of the head and he was sort of slanted on his side but his neck was stuck on the wall beside him,” said Sean.

“I was asking the man to squeeze my fingers and I was trying to look at where the bleeding was coming from when someone said ‘the car is on fire, it’s going to blow up’ so I started dragging him down the road by his ankles.

“I tried to put him into the recovery position but his arms and legs were locked stiff, so I just tried to pull him towards me and held him to clear his airway.

“I was there about five minutes before the ambulance arrived but it felt like an hour.”

Sean said his work with Street Buddies, an outreach programme which offers support to homeless people, helped him to deal with the difficult situation.

“We go around and help the long-term homeless back into sheltered accommodation and I’ve seen some bodies from that so I think in a way that’s why I acted the way I did and thankfully I had some first aid training,” he said.

“I’ve come to terms with it and I’m alright. The first two days [after the crash] I was a bit distant and not really with it in a world of my own. It did play through my mind a lot.

“The paramedics were really responsive,” he added. “Fire and police and ambulance were all there within five minutes and I think the services did a really good job.”

Anca Balan, manager of Los Dos Amigos in Galleywall Road, said she rushed outside when she heard the crash.

“I thought the car had crashed into the restaurant but then I saw the car and bus and I called the ambulance,” she said.

“It all happened very quickly. Someone pulled the guy [the driver] outside the car.

“Everybody was running away because there was an explosion and the car was on fire.

“I came back inside the restaurant because everyone was running from the car and stayed on the phone with the ambulance.

“It was very close to my restaurant – about ten metres away. I was really scared and that night I was having bad dreams. It was shocking for me.”

Emergency services were called to the crash at about 10.23pm on Monday, May 8.

The driver of the car, a man in his 20s, was rushed to hospital with life-threatening injuries.

The passenger of the car, also in his 20s, was taken to hospital but his injuries were not thought to be serious.