'Be kind to each other' 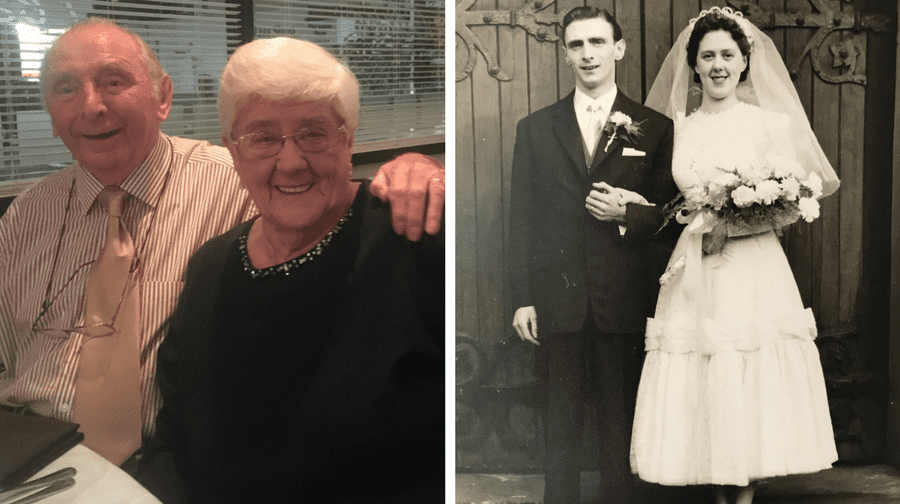 Bill and Pat Hickson pictured on their wedding day 60 years ago (right), and today

A Bermondsey couple have shared their secret to a long and happy marriage as they prepare to celebrate their diamond wedding anniversary.

The pair first laid eyes on each other more than 62 years ago at a dance in Lambeth – which Bill happened to be passing – and have been together ever since.

“My friend and I went to the School of Dance in Lambeth one Saturday when they had a general dance, and Bill was out of the Army and happened to hear the music and came in and that was it,” said Pat, who is chair of Bonamy Estate tenants’ association, while Bill is treasurer.

“We went to the pictures the following day and it just went from there.

“We married when I was seventeen, just before I was eighteen, and we had our first child, Gary, a year later.

“I think people did get married younger then but things have changed – I think women now have careers, although I was a dental nurse when I got married.”

The couple married at St Philip’s Church in Kennington Road on March 22, 1958, and hosted their wedding reception above a pub called the Tankard.

“We didn’t go away for an actual honeymoon,” said Pat. “There wasn’t a lot of money around then but my husband was absolutely brilliant – he paid for everything, even my wedding dress, and his brother paid for the wedding cars.

“We had a nice flat and everything was new in the sitting room and kitchen – we had a much better start than a lot of people, but it’s all down to my husband.”

Pat and Bill have two children – Gary, 59, who was a helicopter pilot in the Army and left as a Major after serving two tours in Iraq, and Joanne, 54, who works for Canary Wharf Management.

“My husband is a wonderful father to our two children,” said Pat. “Our children are very important to both of us.”

“We go on holiday together and I enjoy sitting there watching him fish,” she added.

“We’ve had our ups and downs – anyone who says they go through their marriage with no arguments are either very bored with each other or lying – but when you love each other you come through it.

“We are still here, we still love each other, we support each other – and hopefully we will see our platinum.”

Bill added that his advice for a long and happy marriage was to “be kind to each other”.

The pair will celebrate their 60th wedding anniversary with family and friends this Saturday, March 17.