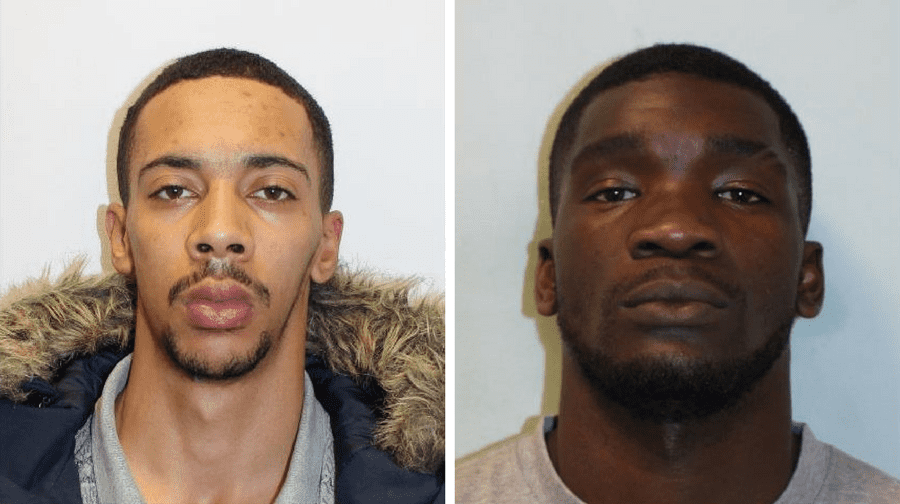 Two thugs have been locked up after beating a Bermondsey dad so brutally in a random attack he was left unable to recognise his own daughter.

Jamal Hislop-Whall and Derron Brown attacked two brothers aged 57 and 34 while they walked back to their home in Longfield Estate, Bermondsey, just after midnight on September 25, 2016, following a family party.

At the entrance to the communal steps of their block, the brothers were confronted by three men, including both defendants, with one asking “what have you got for me?”

Both brothers were then repeatedly punched and kicked in a vicious attack.

The elder brother was dragged down the concrete steps of the block and left unconscious.

His younger brother told Inner London Crown Court: “I thought they had killed him. I thought my brother had passed away”.

The elder brother suffered horrific injuries as a result of the robbery.

He had a bleed on the brain, smashed front teeth and a detached lens in his left eye.

The father-of-four spent two weeks in hospital following the attack and when his family visited he could not remember who his daughter was.

The younger brother himself suffered bruises and cuts following blows to his face, arms and legs. They both had items stolen, including a mobile phone and car keys.

Hislop-Whall was arrested near to the scene shortly after police were called. He was searched and police found the stolen mobile phone.

A speck of blood found by forensic examiners on his right trainer revealed that it belonged to the elder brother victim.

Brown was later identified as one of the attackers and arrested at his home address on October 31. Police searched his address and recovered the victim’s stolen car keys from a rucksack in his bedroom.

The effects of the attack have also been life-changing for the elder brother.

He has had to give up work as a taxi driver because he can no longer drive, he has impaired vision in his left eye despite surgery, and he now has to walk with a stick and be visited daily by carers.

“This has had a tremendous emotional impact on me,” he said in a victim impact statement read out in court.

“I feel stressed all the time and frustrated, I don’t like to go outside anymore and don’t enjoy socialising.

“It is without doubt that I am a different person now than before the attack. I have lost my profession, my health and my confidence.”

His wife’s statement, also read out to the court, said: “After I heard the commotion outside, I went downstairs and saw my husband lying on the floor covered in blood.

“He could not speak. I was shocked and horrified, and thought he’d been stabbed.

“We have four children and all our lives have been changed.

“We are having to adapt to him being a different person since this terrible attack took place. There are so many ways this has affected all of us and life will perhaps not be the same for us again.”

Jamal Hislop-Whall, 24, of Copleston Road, Peckham, and Derron Brown, 24, of Harewood Gardens, Croydon, were jailed for ten years each at Inner London Crown Court on Thursday, May 11.

The judge, Recorder Mr MP Taylor, said: “Both brothers had the misfortune to come upon you. Both of you quickly saw them as a mark, men you could rob.

“It is lawless behaviour. You set about the elder brother. You laid into him with fists and feet.

“It was gratuitous. His life will never be the same again; he has life changing injuries.

“I did not see any remorse in the trial. You portrayed them to be the aggressors, that was cynical.”

Detective Constable Matt Griffiths, from Southwark CID, who investigated the case, said: “This was a truly shocking and despicable attack on two members of the local community who have lived in the area for over 20 years.

“The brothers were simply walking home and were most likely identified as easy targets in this unprovoked assault. They were savagely beaten, all for a mobile phone and a set of keys.

“The family were supported in court by several residents of the estate who gave evidence for the prosecution.

“This shows how the community is willing to come together to help each other in the face of such a cowardly and brutal attack.

“The sentences handed to Hislop-Whall and Brown should send a clear and stark message that this type of behaviour will not be tolerated.”