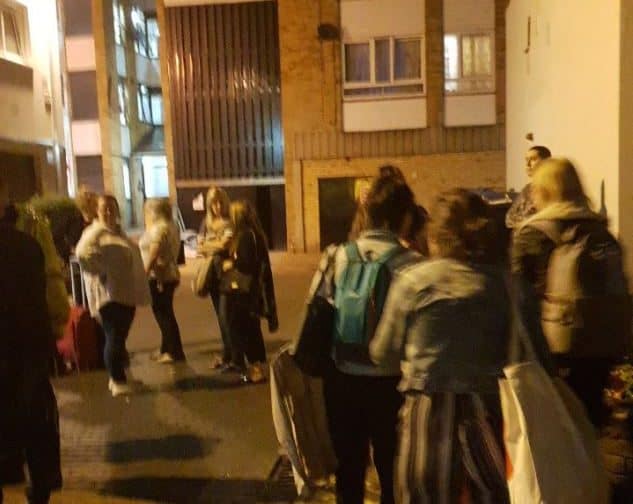 Residents evacuated from a Bermondsey estate following a dangerous gas leak have told the News of their hotel nightmares – because the gas company booked them rooms all over London on a nightly basis.

Hotels were provided for 43 families evacuated from the Parker Row flats on the Dickens Estate in Bermondsey after a dangerous gas leak on Monday night.

The leak is still being fixed and residents are not yet allowed to return home.

However, several have have not been guaranteed an extended stay at a hotel or a room in the borough –  with some sent more than eleven miles away.

One resident, Mimi, arrived in London on Sunday and as a result of the bookings has now lived in four different London boroughs in just four days.

Last night the postgraduate student and her flatmates – who are all NHS medical staff at King’s College – were placed in a hotel in Hammersmith, west London, over eleven miles away.

She told the News: “I’ve lived in London for four days and each night I will have slept in a different London borough.

“It’s been quite shambolic. Our first night we were sent to Liverpool Street Travelodge at 11:30pm and at 12:45am they told us we weren’t booked in and we had to go to the next one in Aldgate.

“Then we found out we were being moved to Covent Garden Tuesday night and there was some failure in communication between the gas company and the hotel which lead me sitting in the lobby for about an hour waiting for the gas company to send over payment details to the hotel so we could check in.”

Tonight the postgraduate student will be staying in yet another hotel near to the Barbican.

She added: “We’re basically living out of a rucksack.” Families have told the News that hotel planning has been ‘shambolic’ following the emergency gas evacuation Image: SGN Gas / YouTube

Another resident Ed, slammed the company for their lack of planning with hotels which he said had taken a toll on his mental health.

The single parent, who is in a hotel in the city, said: “It’s been extremely stressful. Nothing has been planned.

“I need to go to work and look after my daughter, but I haven’t been able to this week because I’ve been allocated a hotel in the middle of the city.

“The gas company just booked people in at five o’clock which is really inconvenient because it means we have to wander around with our clothes before we know whether we will be able to stay the night.”

Ed, who is a father to an 11-year-old girl, also accused the gas company of not following proper procedure when evacuating the flats.

He said: “They started digging before they told people to evacuate so when I arrived at home it was 7:30 in the afternoon [Monday] and I wasn’t allowed to get into the building.

“My daughter was still inside since 12, and nobody knocked on the door for her to come outside.

“If there was so much of an issue that we needed to be evacuated why did my daughter spend the afternoon in the flat sleeping and nobody bothered to knock on the door and tell her to get out?

“She could have died.”

Waseem Hanif, a spokesman for SGN said: “We ensured that all residents temporarily evacuated from Wade House flats in Parkers Row were put up in hotels, or had their own alternative accommodation, while their homes were being made safe for them to return.

“While we aimed to move residents into accommodation as convenient as possible, availability of hotels meant that some people needed to be moved from one hotel to another. We’d like to apologise for all the inconvenience this may have caused.”

He added that “safety is at the heart of everything we do” which led to the “difficult” decision to evacuate everyone while the building is made safe and the pipe is repaired.

Residents have now begun returning to their homes after the pipe was fixed this morning.