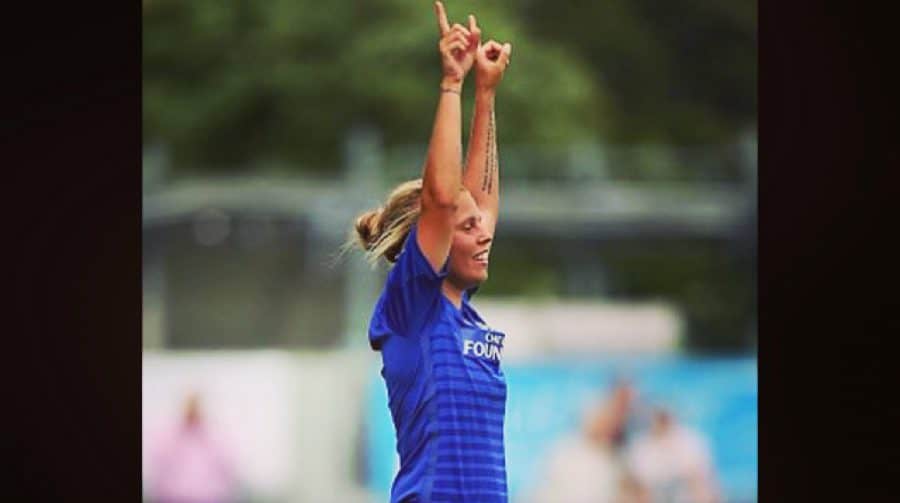 Gilly dedicating a goal to Tommy after scoring last week.

A footballer from Bermondsey will pay tribute to Tommy Blackmore when she plays in the Women’s FA Cup final at Wembley Stadium on Saturday.

Gilly Flaherty, who was “close friends” with the late Bermondsey boy, will wear a black armband and football boots emblazoned with his initials. His brothers will be treated to VIP treatment at the famous stadium for the game.

The 23-year-old will line up for Chelsea against Notts County exactly a week after attending Tommy’s funeral in Honor Oak.

She said: “I met Tommy through his brothers and we became close friends. We met up every Tuesday for a Starbucks and loved to talk about football.

“He always had something to say whenever I bought new boots. We were both fans of classic all-black football boots, which is what I will be wearing at Wembley. We were also both massive Millwall fans.”

Gilly, who grew up in Lower Road but now lives in Surrey, still very much considers herself a Bermondsey girl.

She said: “I live in Surrey now because it’s easier for my job but I’m still back in Southwark at least twice a week. It’s still home. My first club was the Millwall Lionesses and I run a free fitness club in Southwark Park every Tuesday.”

After impressing as a youth player, Gilly was signed by Arsenal. She played for one of the most successful women’s sides of all time, winning eleven trophies during her seven years at the club.

Last year she was signed by Chelsea, who will be aiming to win their first ever Women’s FA Cup this Saturday.

She said: “I’m really looking forward to it. Everyone, whether you’re a boy or a girl, dreams of playing in the FA Cup when they’re a kid. Chelsea reached the final in 2012 but lost, so I’m really hoping we can get our first win.”

Chelsea will play Notts County at Wembley Stadium at 1pm this Saturday. Gilly’s free fitness club at Southwark Park takes place every Tuesday from 7-8pm. All ages and abilities are welcome.

Special fundraising day to be held in Tommy Blackmore’s memory