Southwark News office is one of the buildings without water today 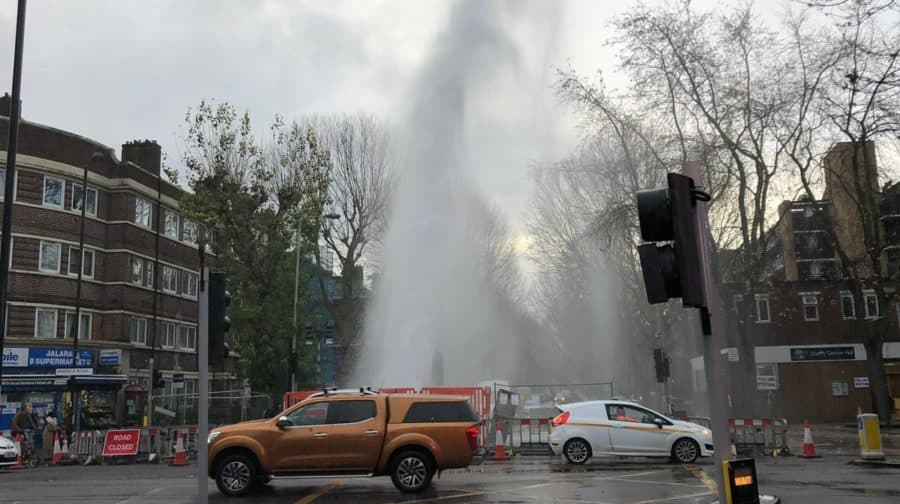 We were warned it was likely to be a wet polling day, with the weather likely to affect turnout.

But people of Bermondsey weren’t quite prepared for the sight that confronted them in the early hours of this morning.

A burst water pipe on Jamaica Road, near the junction with Southwark Park Road is still shooting water in the air.

When they said it was going to be a wet polling day… pic.twitter.com/m0UkpRPFS2

Hundreds of homes in surrounding estates and shops and offices – including the News‘ base at the Biscuit Factory, are without running water.

As yet there is no information about when they will be reconnected.

The leak is not related to the Cycleway 4 construction work, but instead due to SGN emergency gas works.

Southwark Council say a polling station, right next to the leak, is still open despite reports circulating online that it was closed, flooded and inaccessible due to flooding.

It is best approached via the west of Jamaica Road.

Duncan Whitfield, (Acting) Returning Officer, Southwark, said: “Despite Thames Water’s burst water main, no-one has or will be prevented from voting at Cherry Garden Hall in Bermondsey today. Thames Water has turned off the water and is fixing its burst water main, but access to the polling station itself has not been compromised and our staff are on site to assist and support all voters.”

A spokesperson for Thames Water said: “One of our water pipes was damaged by a third party doing road works in the area.

“More than 1,000 properties are supplied by the pipe so rather than simply turn it off, we’re re-routing the water so everyone stays connected.

“We’ll then work to repair the pipe.”