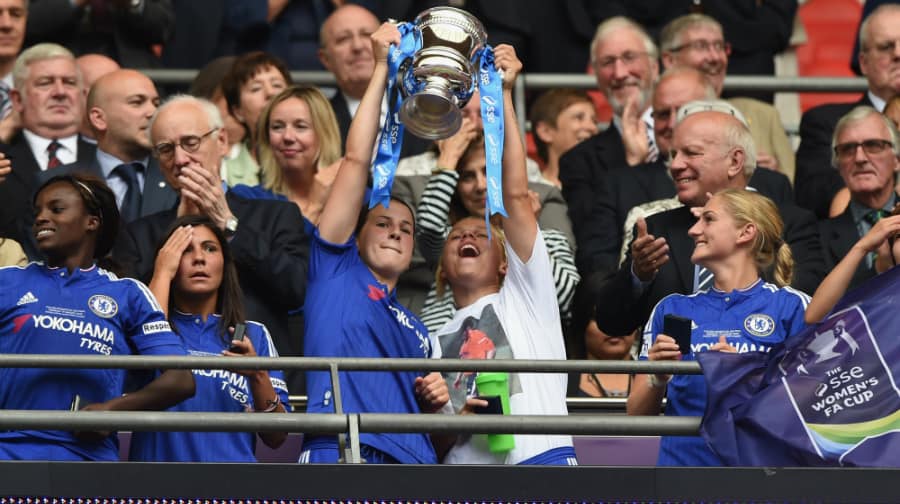 Gilly lifts the trophy in her memorial t-shirt.

A Bermondsey footballer who won the Women’s FA Cup final at the weekend has dedicated her victory to her late friend Tommy Blackmore.

Gilly Flaherty wore a black armband and boots emblazoned with Tommy’s name during the final at Wembley last Saturday. She was also watched by millions on TV as she lifted the famous trophy wearing a special memorial shirt.

The 23-year-old played the full match as her Chelsea side beat Notts County 1-0 in front of a record-breaking crowd for women’s football in England.

“It’s been absolute carnage since”, she told the News. “We went a bit crazy celebrating. I just want to go back and relive every second of the game.

“Notts County were very solid and a hard team to break down and we knew they would be dangerous from set pieces.

“It’s my sixth FA Cup final win but you never get bored of winning. I’ve set myself a target of winning a few more.”

The Bermondsey girl, who began her career at Millwall Lionesses before enjoying great success at Arsenal and now Chelsea, said she was “so proud” to have paid tribute to Tommy in the home of football.

She said: “It was really special, to be able to take him up there with me. His brothers were in the stadium and we met outside by the Bobby Moore statue after the game. I was really proud.”

She added that she was a “big Bermondsey girl at heart” and vowed to continue to support the community that she still calls home, despite now living in Surrey.

Gilly, who is Chelsea’s vice-captain, was joined on the winner’s podium last weekend by Katie Chapman. The club captain is also a Bermondsey girl and began her career, like Gilly, at Millwall.

Gilly said: “I’m so proud of what we’ve done for the community and hope we can keep making memories and doing everyone proud.”