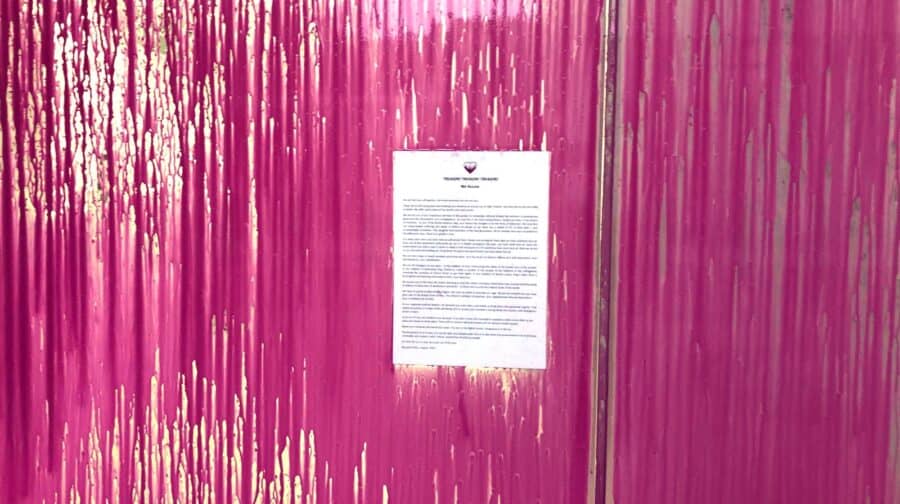 An image posted by the group after yesterday's paint attacks (Image: Beyond Politics)

Two people have been arrested after a paint attack on the Green Party HQ in Bermondsey’s Biscuit Factory yesterday.

Police sent officers to the headquarters of all four major political parties  – Labour, Conservatives, Lib Dems, and Greens – which were subjected to vandalism yesterday.

The Beyond Politics Party has claimed responsibility for the damage, saying it had carried out the attacks to highlight ‘political treason’.

In a statement, a spokesperson for the group said: “We are throwing paint over the Green Party to show their complicity within a political system which is destroying us.

“The Green Party claims to have progressive policies such as a Green New Deal and degrowth economics.

“But there are two massive problems: firstly, if they were ever to come to power, they would implement these policies in a top-down way, as a largely white, middle-class group.”

In another video posted online, a member of the group writes: “Liberalism reeks of the death camps” in pink paint on the office’s wall. A picture of Labour’s HQ posted by the group (Image: Beyond Politics)

“Two arrests have been made and the suspects remain in custody at Brixton Police Station.

“This allegation is being dealt with by a Central London Unit as part of a wider investigation.”

A spokesperson for the Green Party has said: “The Green Party has been at the forefront of climate action for many years and will continue to drive forward a more democratic approach to politics which challenges climate and social injustice.

“This is a police matter and so we are unable to comment any further.”