The original joy slide was torn down in the 1980s 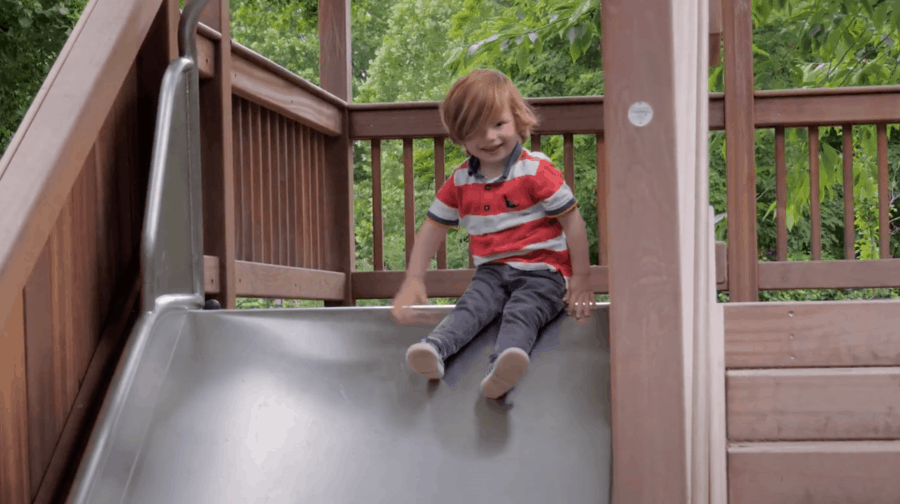 A child playing on the joy slide

The new Bermondsey joy slide has been officially opened, a century after the original was built, and it’s certainly a hit with children playing on it.

The first joy slide in St James’s churchyard on Jamaica Road was commissioned by Arthur Carr, the owner of the nearby Peek Freans biscuit factory. The new slide was designed for free by Fergus Carr, the architect great-great-grandson of the factory owner.

The new version, also in the churchyard, has planting on the side, in a nod to former Bermondsey mayor Ada Salter’s radical beautification committee in the 1920s.

Mayor of Southwark Cllr Barrie Hargrove cut the ribbon on the new slide on Wednesday June 30.

He said: “This space here in St James’s Church has always seemed to me like the real heart of Bermondsey… it’s a real honour for me to be here today.

“It’s almost like poetry that Fergus… has been able to contribute and bring something back that was so much the heart of this particular space.”

Iconic ‘joy slide’ set to come back to Bermondsey in 2021

St James’s vicar Canon Gary Jenkins told the assembled guests: “We have been waiting months – even years – for this to happen. One of the things that I discovered when I became vicar in Bermondsey eight years ago is that there’s a tremendous memory of the joy slide, and I think I’ve scarcely taken a funeral without someone in the family saying ‘we used to come to your church and we used to go on the joy slide.’

And then a whole load of people said ‘isn’t it a shame that there’s no longer a joy slide? And then we had this thought ‘Well perhaps there could be – there could be a joy slide again. To cut a very long story short, there is a new joy slide here in Bermondsey in the 21st century – which children are already enjoying.”

Architect Mr Carr came to the opening ceremony. Canon Jenkins added: “When we had our community fun day to begin raising money for the project, someone came up to us and said ‘hi, I’m Fergus. I’m the great-great grandson of Arthur Carr and I’m an architect, and I could design this project for you’.

Jonathan Sedgwick, acting archdeacon of Southwark and vicar of St George the Martyr on Borough High Street, said a prayer of dedication for the joy slide.

Canon Jenkins added: “One of the things that caught my imagination when I heard that there had been a slide in the churchyard was its name – the joy slide. I loved the fact that children in the shadow of our church can come and play and have joy.

“Isn’t that a wonderful thing, to give joy to the children in our community? We believe in a God who loves everyone, who wants to bring his joy into people’s lives.”

After the speeches several children came up and played on the slide – perhaps marking its ‘real’ opening.