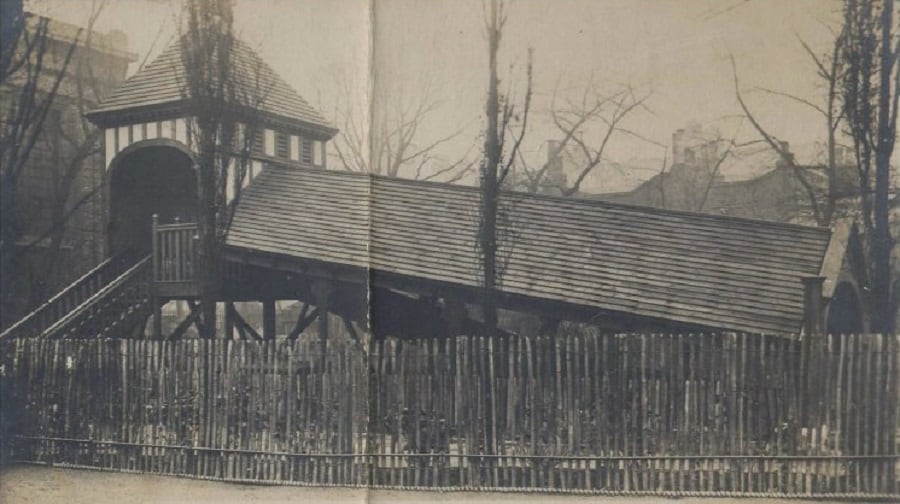 The much-loved ‘joy slide’ which first brought delight to the lives of Bermondsey children almost a century ago will be recreated by the great-great grandson of the man responsible for the original.

After watching children use a step outside St James’ Church in Thurland Road as a slide, Peek Frean biscuit factory chairman Arthur Carr made it his mission to give them a real one to play on.

He joined forces with fellow Quaker Ada Salter, the councillor responsible for the beautification of Bermondsey, and a huge structure known as the ‘joy slide’ was opened in St James’ churchyard in 1921. Generations of Bermondsey children enjoyed hours of fun queuing up to speed down the slide on a mat – but it was sadly torn down in the 80s after arson and vandalism made it unsafe.

But now Arthur Carr’s great-great grandson Fergus Carr, an architect, is planning to bring a slide back to the same spot after securing permission to build a ‘joy slide for the 21st century’ based on the step the children used to play on.

It is hoped the slide, which will be smaller than the original but located in broadly the same area next to the churchyard’s playground, will be opened in 2019.

“It will have a pair of roofs covered in greenery referencing Ada Salter. Designs for the new slide, expected to be built in 2019

Read next: The summer 14,000 women walked out of Bermondsey’s and Rotherhithe’s factories

“The idea is it will be more compact and sustainable but it will have references to the original slide.”

The 30-year-old added that the original slide was made of timber in a mock Tudor style with a tiled roof and was probably designed to show how houses could be built.

Historian and author Graham Taylor, who has been involved in the project with Carr Architecture and St James’ Church, said the slide was one of the first of its kind in the country and was probably paid for by Arthur Carr. “In 1921 hardly anyone had heard of a slide,” he said. “It was a great innovation – the latest playground technology – and it was called the American slide in the press.

Read next: Peek Frean biscuits could be back on UK shelves next year

“Ada Salter’s beautification committee was founded at the beginning of 1921 so it would’ve been one of the first things they did.

“It was nearly all slums around here so these were slum children who were getting a break.”

About 75 per cent of the funding for the slide will be provided by charitable donations and the council, while the remainder will be paid for by individual donations. The project, headed up by the Friends of St James’ Churchyard, has the support of Southwark Council, St James’ Church, Grosvenor – the current owner of the Peek Frean biscuit factory site – Salmon Youth Centre, Tideway and United St Saviours Charity.

Anyone interested in finding out more about the project or how to donate can visit www.joyslide.com

I am 88 (dob 10.10.31 My aunt lived quite close to the park, and when we visited a trip to the slide was a must. one day I watched other children bending their knees to their chest when they slid down, I thought I can do that and so I did only to come a cropper as
I had rubber soled shoes on which did not slide but sent me over the side lading on my nose which is scared to this day

I played on that slide back in 1960 before we moved away from London and the smog to get clean air to breath. it is good to build the slide but why not a true replica? I am guessing it is down to health and safety concerns. I remember the coconut mat and the highly polished wood it was such a treat back in those days