Bermondsey man rescued after jumping into Thames to save dog 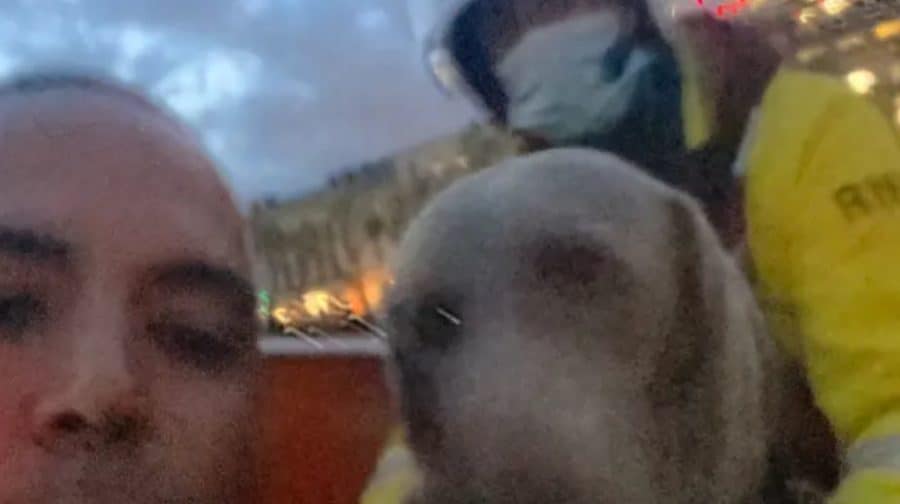 Deven Nyas with Apollo and a lifeboat worker

A Bermondsey man climbed into the River Thames to save his dog, after the beloved pet jumped in seemingly at random.

Deven Vyas was walking his dog Apollo along the river from his home in Tooley Street to a friend’s house in Rotherhithe for a Eurovision party on Tuesday (May 18).

Suddenly Apollo jumped into the Thames near Cherry Garden pier, apparently for no reason. “It wasn’t like he chased anything, there wasn’t a bird or a cat or anything – he utterly randomly did a sprint towards the wall and went flying towards the Thames,” Deven told the News.

Lawyer Deven called the emergency services but soon began to fear for Apollo, a ten-month Weimaraner.

“I looked over the wall and couldn’t see him,” Deven said. “Ripples in the water – I assumed the worst, I assumed he’d drowned and died. When I looked over the other side I saw that he had actually managed to get to the ledge on the side. I was trying to keep him calm. He started to panic and started to cry. I could see that the tide was getting a bit more aggressive.

“He hates water, it’s not like this is a dog that likes swimming. He doesn’t even step on puddles, he’ll jump over puddles. But he was panicking, I could see him thinking about getting back into the water to get closer to me.” 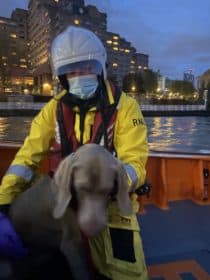 A lifeboat worker with Apollo

Fearing that Apollo would be swept away by the treacherous river, Deven bravely got in the water to save his dog.

Asked if he was scared for his own life, Deven said: “Honestly, at that moment my fear was him getting swept away. I just thought I’d find a way to keep myself hanging on. I had no choice really – there was no way I could let that happen. If he got swept in whilst I was watching I think I’d never have gotten over it.”

But he soon got stuck himself, trapped by the fierce current.

Luckily the lifeboats arrived after about fifteen minutes and hauled both of them out of the water – although it took a while for them to coax a shocked Apollo into the boat. “He’s a big dog, a heavy dog, he doesn’t like water,” Deven said. “So the whole thing was quite surreal to be honest.”

Deven was full of praise for the lifeboat workers who saved him and Apollo. “Those guys were amazing. So compassionate and so gentle as well,” he said.

After being dropped off at London Bridge City pier, Deven was forced to cancel his Eurovision plans and went home with Apollo for a hot shower and a long sleep.

“We’re still grieving from the loss of Eros,” he said. “He’d been with us for ten years. Such a lovely beautiful boy.

“That was the very first thing that went through my mind when I was looking over the wall. I thought ‘Oh my goodness, I’ve just lost two dogs in a matter of weeks.’ – which was just a horrific feeling.

“Apollo’s a baby, he’s only ten months. He’s looking forward to a whole life ahead of him.”

Both dogs are named after Greek gods and Deven said their names suit their respective characters. “Apollo lives by the name of dancing and music. He clearly does have lots of energy. Eros just lived by his name too, he just spread love. Eros was very well known around London Bridge, if you went for a walk, quite often people stopped me asking ‘is this Eros?’ when he was alive.”

Apollo is now “totally fine” but Deven said he could no longer trust him and would have to put him on a lead when they walk by the Thames.

It comes after two recent tragic incidents of people dying after falling in the Thames in Bermondsey. Folajimi Olubunmi-Adewole died after jumping off London Bridge to save someone who had fallen in, A 13-year-old schoolboy died after falling off Tower Bridge.

Southwark NewsNewsBermondsey man rescued after jumping into Thames to save dog