A Bermondsey man has been reunited with his grandfather’s headstone after it disappeared from his grave. Dave Nicholls discovered the headstone was missing during a visit to his grandfather’s grave – where his grandmother’s ashes were also scattered – in Camberwell New Cemetery last month. The 50-year-old was unaware the council had been given permission ... 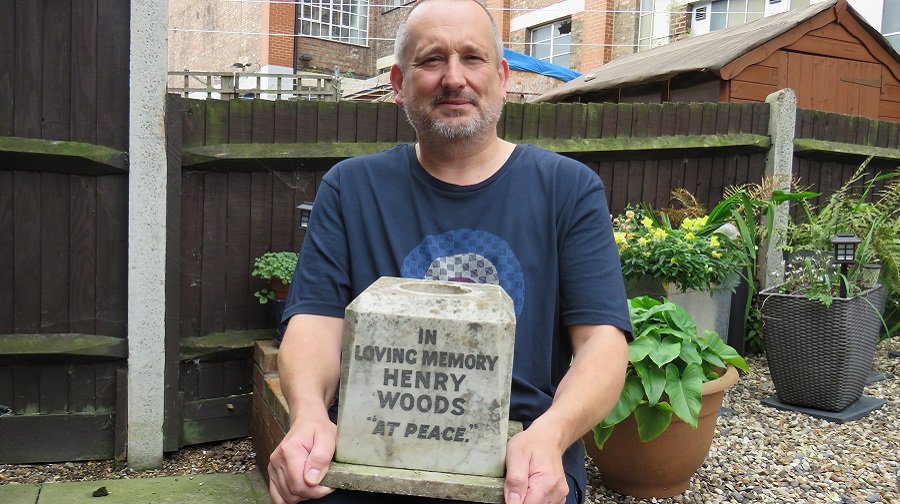 A Bermondsey man has been reunited with his grandfather’s headstone after it disappeared from his grave.

Dave Nicholls discovered the headstone was missing during a visit to his grandfather’s grave – where his grandmother’s ashes were also scattered – in Camberwell New Cemetery last month.

The 50-year-old was unaware the council had been given permission to dig up graves at the cemetery’s One Tree Hill site and build a pathway and new graves as it deals with the borough’s burial space shortage.

Mr Nicholls had planned to scatter his mother’s ashes with her parents after she died recently, but had to make other arrangements after finding the headstone had been removed.

Cemetery workers have since managed to locate the headstone and return it to Mr Nicholls, along with a stone nymph decoration, following an article in the News.

“When I picked it up it was quite distressing and it really affected me, because we saw contractors working on the site,” said Mr Nicholls.

“I’ve got it back at least but it’s not the same; they are there and they’re going to put a path over them.

Read more: ‘I went to scatter my mum’s ashes at my grandparents’ grave…but it was missing’

“I used to go up there, especially in the summer months, because it’s such a beautiful view and quiet and peaceful and just sit there and have my packed lunch and chat to them in my own mind.”

Mr Nicholls said he planned to landscape his back garden and create a memorial to his grandparents.

The father of three said he understood the borough would eventually run out of burial space, but that the council could have consulted more.

He said: “I had to find out via social media what was happening.

The grave before and after the headstone was removed

“I feel like the council could have done more to contact me; they still haven’t made an effort because they’ve put the responsibility in the hands of the cemetery director.”

Cllr Ian Wingfield, Southwark Council’s cabinet member for environment and public realm, said: “We are delighted to have returned Mr Nicholls’ memorial to him last week.

“Let me apologise to Mr Nicholls, but sadly, no record was made of the families of those buried in old public graves at the time, as was the case with Mr Nicholls.

“We have made every effort, over a number of years, to contact people; through public consultations and a series of public exhibitions for our plans, by posting notices at all the entrances to the cemetery, and in the area of works, and by placing adverts in the Southwark News.

“We have a chronic shortage of burial space in the borough and if nothing is done it will run out next year.

“We are currently working to create more space, but no graves have been disturbed or dug up during this work.

“Family members are welcome to collect their relatives’ memorials from us, and we would invite them to get in touch with our cemeteries office to do so.”