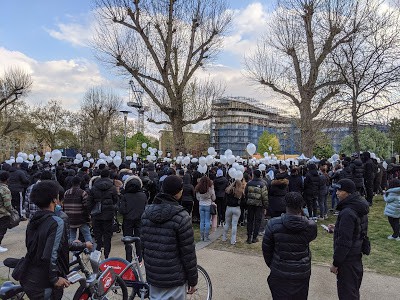 The memorial to Jimi on Spa Gardens. Image: Gary Jenkins

Hundreds of people gathered for a memorial last week for Folajimi Olubunmi-Adewole, the young Bermondsey man who died after jumping into the Thames at London Bridge to save a woman in the water.

Friends and family of Jimi, as he was known to the people close to him, gave speeches, said prayers and read from the Bible at the Friday afternoon event at Bermondsey Spa Gardens, not far from the family home on the Neckinger Estate.

“It was a really moving event,” said Gary Jenkins, vicar of the nearby St James and St Anne’s parish on Jamaica Road. “There was a very good turnout from the local community and from friends. They were very quiet, very respectful. There was a very special atmosphere.

“There were some wonderful speeches about Jimi’s life, prayer, a reading from the Bible – it was a great event. The whole community has been so deeply moved by this.”

The congregation at St James and St Anne’s has been praying for Jimi and his family, Jenkins said.

“I think we all recognise that this was a heroic act. The two words that come to me are compassion and bravery. He was a young man of great compassion and great bravery.”

Jenkins visited Jimi’s parents Michael and Olusankami to pay his respects. Sir Simon Hughes, who was MP for Bermondsey and Old Southwark for more than 30 years until 2015, also visited.

Bishop Christopher Chessun, of Southwark Cathedral, near where Jimi jumped into the Thames in the early hours of April 24, also paid his respects to the young man’s family on Friday.

A memorial has been set up by the Thames opposite the cathedral, where well-wishers have put down flowers to honour Jimi’s gallantry. Southwark mayor Cllr Barrie Hargrove and Cllr Evelyn Akoto are among those who laid down flowers.

Bishop Christopher said that prayers were also being said in the cathedral for Jimi and his family. 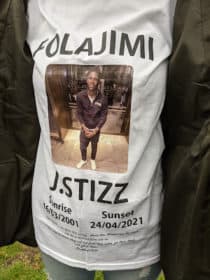 “From my perspective as a bishop, there is something about so many young people, their acts of selfless generosity, rarely get the news coverage they deserve, because the focus, particularly in London, is often on bad news,” he told the News this week.

“And… obviously very sadly as a result of his selfless generosity Jimi surrendered his life and that’s a terrible tragic consequence of his bravery.”

Bishop Christopher added that Jimi’s actions were a pure expression of Christian ideals.

“There is a very powerful Christian principle about being willing to give without counting the cost. That isn’t always about surrendering your life, people don’t often set out intending to do that, but it is about loving your neighbour as yourself.

“St John’s Gospel has very beautiful words: ‘There is no greater love than this: to lay down your life for your friend’.”

Campaigns to get Jimi recognised with an award for his bravery are still ongoing. For more details on how to nominate Jimi for a George Cross, visit: www.gov.uk/honours/recommend-bravery-award

Separately, the City of London Police has asked the Royal Humane Society to nominate Jimi for a bravery award. The force is also looking to give him its own commendation.