'He was just gobsmacked, he had a big smile on his face,' said Harvey's doting dad, Dean 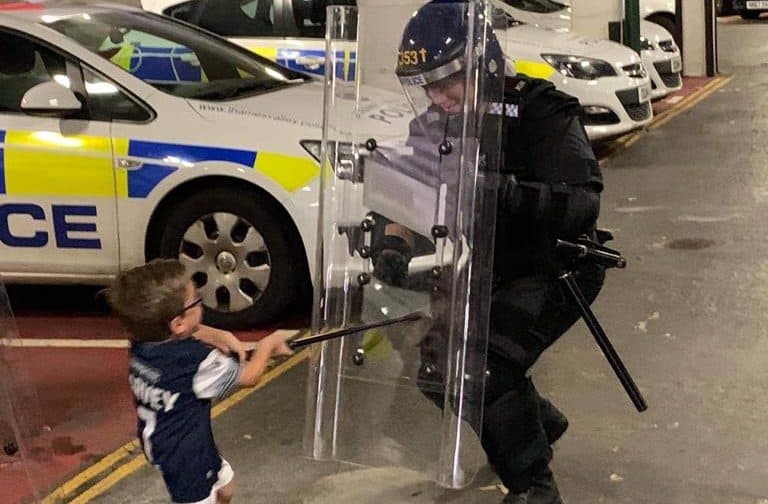 Millwall super-fan, little Harvey Brown, was given a surprise tour of a police HQ after an officer saw coverage of a half-marathon run in his name.

As the News reported, Millwall supporter Steve Rendell, from Reading, ran the gruelling London Landmarks Half Marathon in March, raising £6,300 for the MPS Society in the little Bermondsey boy’s name.

After seeing the coverage, a friend of Mr Rendell’s who works at Reading police station contacted Harvey’s family to organise a VIP tour of the station – including putting the station’s Public Order officers through their paces. Police made Harvey, who suffers from Morquio, a custom-made t-shirt as part of the VIP tour

“He was just gobsmacked, he had a big smile on his face. They treated him like a VIP,” said Harvey’s doting dad, Dean.

“It’s the things people will do for him, we can’t get our head around the amount of things that people still want to do for him.”

A few weeks ago, Harvey visited @TVP_Reading after his family planned a surprise visit. Harvey is 11 and has Morquio syndrome. He met our Dog Unit, ARV officers, had a tour of the station and put our Public Order officers to the test! We hope you had fun Harvey! ?#ProudToServe pic.twitter.com/Je6itJw5Lu

As well as the all-access tour of Reading police station on August 18, officers even gave little Harvey a personalised t-shirt, a lunchbox to take to school and a police teddy bear. Officers even gave Millwall-mad Harvey his own personalised lunchbox

“He met our Dog Unit, ARV officers, had a tour of the station and put our Public Order officers to the test! We hope you had fun Harvey!”

In May this year the little Bermondsey boy and Millwall mascot was named Southwark’s Citizen of the Year, and was given a special award at a ceremony in Southwark Cathedral.

It was a proud day for TVP Reading Station to have such an amazing visitor, Harvey touched the hearts of everyone he met that day. It was a sad time as all Officers were feeling the loss of a colleague, but as ever they put their feelings a side to make it a special visit. I am proud to serve. Harvey is welcome anytime