It has cost the charity shop £1,500 to replace the windows - while £300 of stock was reportedly stolen 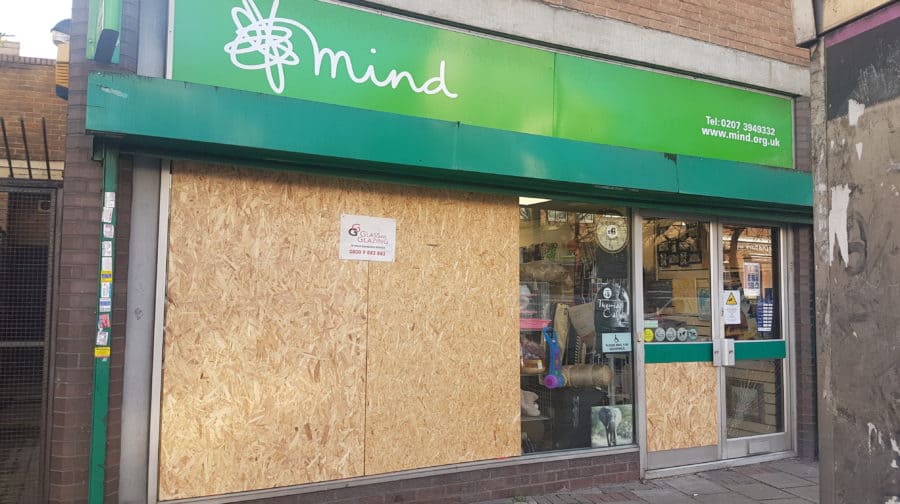 A Bermondsey charity shop is appealing for help after its windows were completely smashed by football hooligans during the Millwall v Everton cup violence last Saturday.

The Southwark Park Road branch of Mind charity shop had its windows smashed by hooligans chasing a man into the shop. The man then allegedly pulled out a knife.

The damage caused by the disorder will cost the charity £1,500 in repairs while £300 worth of men’s clothing was also allegedly stolen by disorderly fans.

The windows have now been replaced.

“It was football day, so we had all the Millwall fans in the pub [over the road], but it all seemed good natured,” a volunteer at the branch who was on duty at the time said.

“Then we heard shouting and I saw the crowd in the pub head over the road. All of the sudden, a guy burst in and they all ran after him.

“He came into the backroom and they all came in to get him. Then the guy pulled a knife out from his pocket. I think it was more bravado, I don’t think he had any intention of doing anything.”

A mother and her child were also in the shop at the time.

A staff member at the shop tried to usher the crowd out but the windows were destroyed in the melee.

The Southwark Park Road branch of Mind now wants extra volunteers to help get the shop back to normal (Image: Google Maps)

The knife-wielding man was reportedly arrested by police. The News asked the police for comment but did not receive a response before publication.

The vandalism has been “really bad for business” said the charity shop volunteer, who did not wish to be named.

“No-one likes the look of the shop all boarded up and new volunteers don’t like the idea of coming into somewhere that’s had that kind of incident.

“We want customers and volunteers to know this isn’t the norm.”

Now the branch wants to encourage people to donate their time to help replace the cost of the vandalised windows and ‘stolen stock’ from the shop.

They added: “It was only when I got home and got in the shower that I realised, ‘Oh it really hasn’t been a good day at work’.

Police have said the outbreak of violence prior to the game was the worst hooliganism the city has seen for some years.

Last week the News reported that over 150 Everton fans made an unscheduled exit from Surrey Quays station before violence broke out on Rotherhithe’s Hawkstone Road.

The nearby Whelan’s pub suffered thousands of pounds worth of damage.