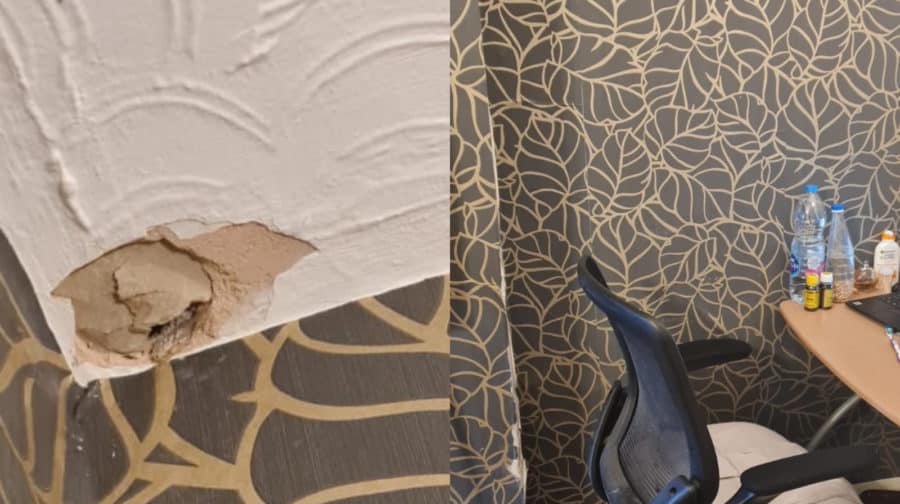 The hole in the ceiling and some of the debris

A woman living in a south Bermondsey block undergoing regeneration has been told she has to wait six days for repairs after builders drilled a hole through her ceiling.

We reported earlier this week that people living in Roderick House and Antony House on Raymouth Road have complained of “horrendous” noise from morning until evening, six days a week – making their lives “a living hell”.

Developers Apex Airspace, who are adding 30 more affordable flats to the blocks, said earlier the building work – which is set to last about a year – should cause “minimal disturbance” to current residents.

But Temi Adenle, who lives on the current top floor of Roderick House, beneath the level where builders are adding new flats, suffered a shock on Wednesday when she heard a loud bang behind her and turned around to find a hole in her ceiling and dust pouring through.

“I just started crying” she said. “I reported it to the housing officer yesterday and she just said ‘oh I apologise’ and told me I need to speak to the [building] manager on site.”

Apex’s Resident Liaison Officer, whose job is to manage the complaints from people who live in the building while construction is going on, told the News that the hole in Adenle’s ceiling would be fixed on Tuesday – a full six days after the drill came through.

Adenle, who has lived in the building for six years, said that on top of the hole in her ceiling, she had been having similar problems to other Roderick house residents in recent weeks.

“It’s crazy. I work from home, I’m in meetings, most of the time on the phone. The noise, the banging, the drilling. It’s just too much – I’m having to move from one room to another.”

She lives in the flat with her four children, aged 15, 11, 10 and a one-year-old baby and said they are all suffering from the noise.

Her 15-year-old daughter is studying for her assessments to replace GCSEs, which are cancelled this year due to the ongoing Covid-19 pandemic – but the noise from the drilling is proving very disruptive.

The Apex officer said they would set up an empty flat for Adenle to work in, which could be ready by Friday (April 30) this week.

Apex specialises in “airspace” development – essentially filling in gaps between or above existing buildings with more housing and got £10m in loan funding from the Mayor of London for this project.

We reported earlier this week that the project had turned into “a living hell”, according to some residents, who complained that work was going on much longer than they were initially warned, and was reaching dangerously loud noise levels.

One resident took noise meter readings on April 20 which they said shows building works reached 85 and 86 decibels. Experts generally say that long-term exposure to noise levels above 85 decibels could harm your hearing. Educational charity Noisy Planet say on their website that “sounds at or below 70 dBA are generally considered safe. Any sound at or above 85 dBA is more likely to damage your hearing over time.”

Replying to an approach for the original story, Apex added: “Apex Airspace are delighted to be working in partnership with LSHA to provide 30 much needed affordable homes in this innovative way – through the provision of airspace flats built off site.

People do not want this type of regeneration. Taking their airspace and totally ruining the appearance of their environment which they were happy with.
Affordable is not affordable. It means 80% of market rent thereby creating a “2 tier” development which is a recipe for disharmony.
We will not be fooled.

Horrible situation for the residents. Adjacent and top floor residents to the project should be offered offsite accommodation during demolition and framing.

It would also be good to understand cost per unit to see if it was worth it. 30 units at “£10m in loan funding from the Mayor of London for this project” plus interest, builders profit and management overheads, I’d estimate each unit around £460-480k. Is a 1 bed @£380k or 2 bed @£580k worth it on Raymouth Road?