The four victims of the “truly horrific” fatal stabbings on Bermondsey’s Bonamy Estate have been named for the first time.

Denton Burke, 58, and his partner Dolet Hill, 64, who lived together on Delaford Road, were stabbed to death along with Tanysha (aka Rachquel) Ofori-Akuffo, 45, Ms Hill’s daughter, from Kennington, and Samantha Drummonds, 27, who lived in Forest Hill.

Called to the scene, officers tasered a 28-year-old man in the house and arrested him on suspicion of murder. This man, from Lewisham, is currently being treated in hospital. He is in a stable condition and remains under arrest.

Venecia Reid added: “She worked very hard in this country to support her two girls and her two grandkids. She did not deserve this.”

Alastair Gourlay, director of estates and facilities at Guy’s, said: “We are devastated to hear about the tragic death of Dolet Hill, who worked as a housekeeping assistant in our pharmacy department for more than 21 years, before her retirement in 2018.

“Dolet was a well-respected colleague, who also helped to improve the workplace for others as an active UNISON representative. Our thoughts are with Dolet’s family, friends and all who worked with her.” 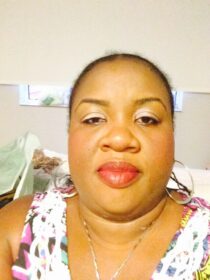 Police were called at about 1.40 in the morning on Monday to reports of a disturbance at a residential address on Delaford Road.

Despite the efforts of emergency services, all four people were pronounced dead at the scene.

Special post-mortem examinations have been arranged for Tuesday, April 26 and Wednesday, April 27, after which they will be formally identified.

Detective Chief Inspector Linda Bradley, who leads the investigation, said: “This was a truly horrific incident and I fully recognise that the distress for the family and the community will be overwhelming.

“We are conducting a thorough and detailed investigation into the facts and we are appealing to anyone who can assist with any information to come forward.

“If you know anything or saw anything that you think might help us piece together the events which led to this, then do not hesitate, please call police.

“You can also call Crimestoppers if you do not want to give your name.” 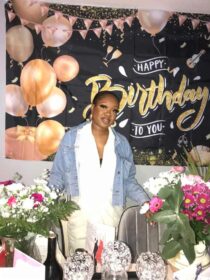 “We deeply appreciate all the help we have already received from local people and I would like to thank them for their patience and support in what is likely to be a protracted inquiry.

“We are moving as fast we can at the scene, but we need to ensure we uncover all the facts and secure every bit of necessary evidence and this may understandably take some time.

“We are aware that we have family, friends and a community that are all asking questions, we are determined to give them the answers they deserve as soon as possible.”

Forensic officers have set up several tents on the street, which is blocked off except to residents.

Chief superintendent Colin Wingrove, in charge of policing for the borough, said: “I want to offer my heartfelt condolences to the friends and family of all those concerned…

“This is a terrible incident and I fully understand how worried the community will be. We are working closely with our partners and local community groups to keep everyone informed and answer their questions.

“Extra officers will be in the area to offer reassurance – please speak to them, they are there to listen to you and act on your concerns.

“Homicide detectives have launched a wide-ranging and relentless investigation into these terrible events, please assist them by avoiding unhelpful speculation and allow them time to uncover the evidence.

“Such terrible events are rare, but I know that will not diminish the shock that will be felt across London and the wider country. I assure you, this investigation will leave no stone unturned in discovering the facts.”

Residents of the Bonamy Estate said on Monday morning that they were “shocked” by the killings, with screams reportedly heard in the middle of the night.

Kyriacos Pieri, who is the chair of the tenants and residents association, said that the group sent their condolences to the family of the victims.

He told the News: “Of course we are saddened by what happened, it’s terrible what’s happening here and across London.”

Another resident, who said she had lived on the estate all her life, said that the killings were “shocking.”

Local politicians shared their horror at the news of the killings on Monday.

Southwark Council leader Kieron Williams said: “I am shocked and deeply saddened to hear of the deaths of four people at an address in our borough. Our thoughts are with the loved ones of the victims and we offer our condolences to friends, family and neighbours at this time.

“We are assisting the police with their investigation to find out what happened and our teams are out in the community today to support and comfort residents. I urge anyone who has information that may help the investigation to contact the police.”

London mayor Sadiq Khan said he was “heartbroken” by the attacks.

“My thoughts are with the family and friends of those who have lost loved ones in this awful crime,” he added.

MP for the area Harriet Harman said: “Tragically four people have been killed and that is shocking to happen anywhere but especially in this very peaceful, quiet, very settled community here.

“The police have arrested someone, but it’s really important still that people give information, any information they’ve got to the police so that whoever committed this horrific crime can be brought to justice.”

Any witnesses or anyone with any information is asked to call police on 101 or contact via Twitter @MetCC. Please quote CAD 406/25APR.

Bermondsey: man arrested on suspicion of murder after four stabbed to death on Bonamy Estate