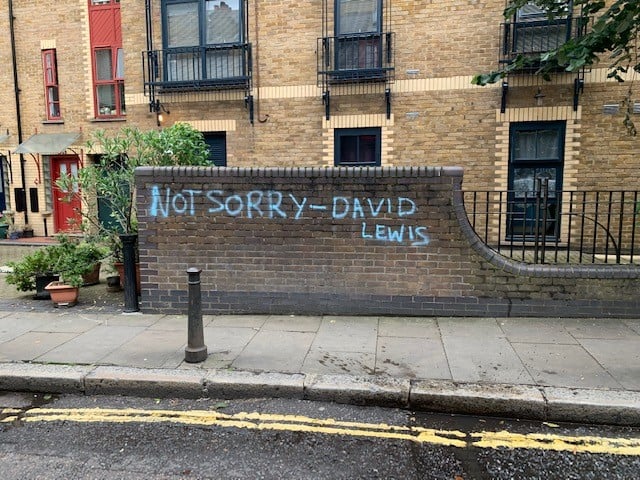 'Not sorry' - David Lewis, reads on example of the graffiti which appeared around Horselydown Lane this weekend

The London School of Economics is investigating after graffiti appeared over the weekend on a Bermondsey street, which residents have claimed is linked to students.

The graffiti appeared overnight on Saturday morning in several locations on and around Horselydown Lane, in between Tower Bridge and Shad Thames. One Horselydown Lane resident who contacted the News about the vandalism alleged that the painted names were ‘clearly’ references to staff at the world-famous university.

“This is simply mindless vandalism of private property that is very upsetting for our community,” said the resident who did not wish to be named.

“We now have to spend literally thousands of pounds on repairs.”

He speculated that the spray-painted names could be the result of post-graduation celebrations.

“LSE received reports of alleged vandalism over the weekend and is looking into the matter,” a spokesperson for the university told the News.

A block in nearby Butler’s Wharf is used for self-catered LSE student halls, accommodating up to 280 postgraduates.

However the spokesman added that while postgraduate students at the university were currently in residence in the halls, there was no evidence to link them to the tags.