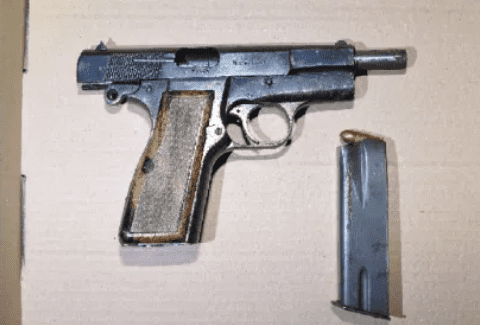 Cops on patrol noticed two men, aged eighteen and twenty, turn away from them and walk into Lucey Way at around 9.10pm.

The pair began running away say police. Cops discovered a knife from outside a house on the estate, and a bag in a garden of another address.

Inside the bag was a gun, with at least three rounds of ammunition. After chasing the two men, cops arrested them on suspicion of possession of a firearm, ammunition and an offensive weapon. A knife was also discovered on the estate

They are in custody this morning.

Police Sergeant Leon Coltress said: “As the result of proactive work by officers from the Violent Crime Taskforce, a loaded gun and a large knife have been taken off the streets in London.

“Stop and search is an important policing tool that helps seize deadly weapons and arrest perpetrators of violence.

“I have no doubt these arrests and seizures have prevented a serious incident taking place last night within Central South Borough Command Unit.”

A resident on the estate who didn’t want to be named: “I was just walking past, there was police everywhere, they were just running everywhere.

“There were radios going off, saying that a firearm had been abandoned. Forensics were here until late, I think some roads are still taped off.”

Good piece of policing by the met, Thanks to the police a serious crime has been prevented