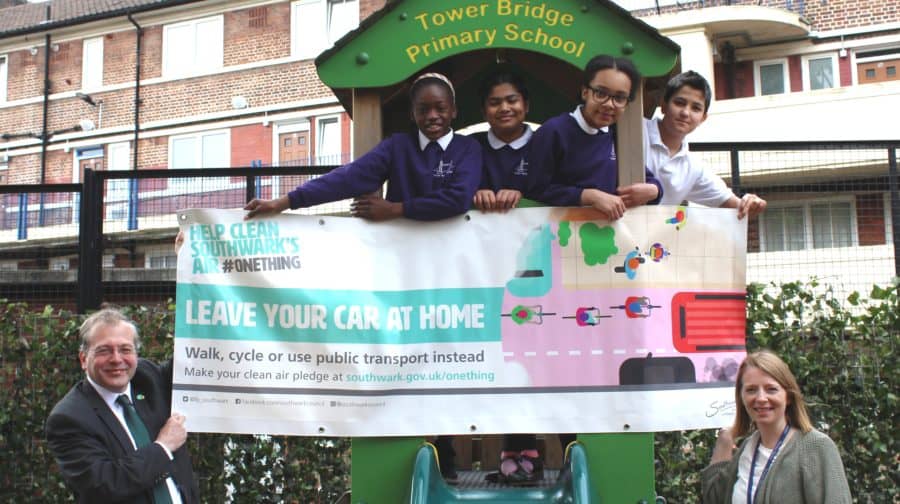 A campaign which asks Southwark residents to pledge one change to clean the borough’s air has been launched with the help of Bermondsey primary school pupils.

Children at the school and Snowsfields, both part of the Bridges Federation, showed off their bug-box installed in the green screen, while pupils Akilah and Zaki told the councillor about the importance of clean air.

Debates have also been held at the school between pupils about air quality, and herbs and strawberries are being grown in the green-screen to teach children where their food comes from.

The council-led campaign encourages people to pledge ‘#OneThing’ to tackle pollution, including using click-and-collect shopping deliveries to cut down traffic congestion, leaving the car at home for short journeys and turning off idling engines.

Cllr Livingstone said: “We are committed to combatting London’s air quality crisis and working hard to address the problem across the council.

“Our people in schools, streets, events, construction, biodiversity and many more areas, are all making changes to help clean Southwark’s air.

“We’ve had huge support from many people across the borough already, but now we are asking everyone to join us and pledge to do one thing to help improve air quality here in Southwark.”

The News has previously reported that pollution hot-spots in the borough include the areas surrounding some primary schools.