Residents in Grange Gardens, off Grange Walk, say they have had “no end of problems” since moving into the new development 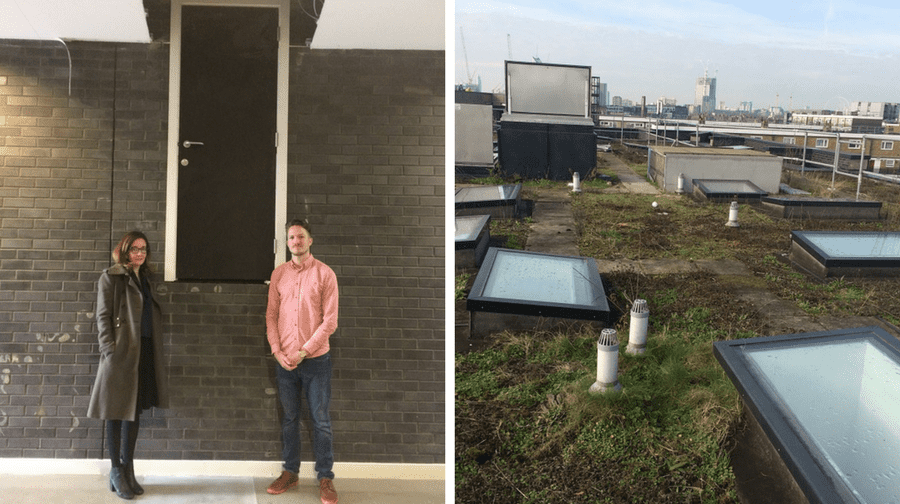 A group of Bermondsey residents are opposing plans to build three penthouses on top of their homes.

Residents in Grange Gardens, off Grange Walk, say they have had “no end of problems” since moving into the new development in January 2012 – and highlighted a “door to nowhere” as just one of the issues.

The owner and developer Hazelwood Properties Limited, has already converted what were originally intended to be ground-floor commercial units into fifteen new flats after residents moved in – and now they want to build three more.

The proposed penthouses would be three three-bedroom flats built as a seventh storey on top of the existing privately-owned flats in ‘block A’, or 1 Haven Way.

They would block out the skylights of residents currently living on the top floor of the building, and would overlook an adjacent block of flats.

Ben Johnson, councillor for Grange ward, with a resident and the ‘door to nowhere’

One member of the Grange Gardens residents’ association, who wished to remain anonymous, told the News that residents were fed up with living on a building site and that they feared there would be a loss of light, privacy, and amenity if plans were approved by the council.

“The top-floor owners bought those flats to a certain standard and now for no reason whatsoever that standard is being taken away from them,” she said.

“They’re losing light and they could be at risk of their flats being damaged because so far the freeholder hasn’t been able to tell us what’s involved in filling in those sky lights, which is really worrying.

“What benefit will three £1million-plus luxury flats add to the area where more affordable housing is needed?

“The density according to our calculations is already something like 65 per cent over what we believe to be the Southwark Council planning guidelines and if that’s the case then we definitely shouldn’t be adding more flats to an already very over-developed small space.

“We’re worried that this is setting a precedent for other developers in the area to think that it’s okay to do this when they see that they’re adding another storey onto our building-  so what’s stopping them from doing the same thing?”

The resident said she felt as though she had “consistently lived on a building site” for the last five years as other developments were built around her and that she had had issues since moving into her flat.

“During the first year the communal boiler used to break down at least once or twice a month and we would lose both heating and hot water,” she said.

“The fountains outside were imagined to give a Japanese garden feeling, but they have never worked properly and leaked from day one. We’ve since had to switch them off.”

An inaccessible door has also been left in the middle of a wall in the entrance hall of one of the blocks, with the outline of what would have been a staircase leading to it still visible on the wall and the floor and a huge hole left in the ceiling.

Residents say there had originally been a plywood staircase leading to the door, but that they asked for it to be removed because it blocked access to mailboxes for pushchairs and wheelchair users but the area was never repaired properly.

Cllr Ben Johnson, councillor for Grange ward, said: “I think these residents have lost faith that any work on this building will be done well or completed and there’s a clear loss of amenities for them, so I think it should be rejected at committee.

“This piecemeal approach of adding flats on to blocks isn’t going to solve the housing crisis and it’s going to affect the residents.”

“Having recently acquired the site, we have no record here but fully intend to work with residents to overcome these concerns.

Ben Johnson, councillor for Grange ward, with a resident outside the development near Grange Walk

“Our proposals for three top floor flats have demonstrated that there will be no loss of light to the existing buildings – this has been independently verified by a daylight and sunlight report and Southwark Council’s own planning department.

“Wherever possible we are keen to minimise noise and disruption from building works.”

The proposed plans for the three penthouses were presented at a planning subcommittee on December 14, but the decision was deferred to allow councillors to have a site visit.

The plans will be presented again at a planning subcommittee meeting on February 28, where councillors will make their final decision.

If given the green light, building is expected to begin in April this year and will take about eight months to finish.