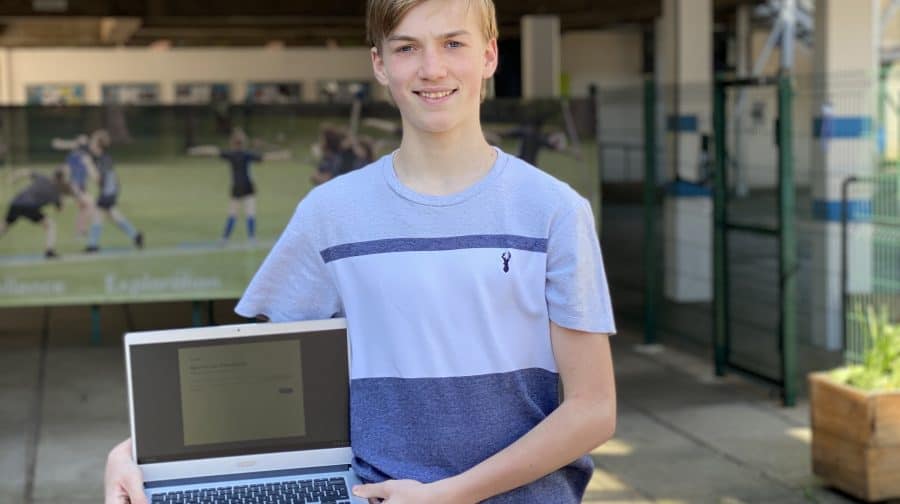 Pupil Frankie says the new laptop means he won't fall behind in lessons. He wants to become an engineer

A Bermondsey school has smashed its fundraising target of £10,000 to pay for laptops for its disadvantaged pupils.

Compass School on Drummond Road established the fundraiser three weeks ago to purchase laptops and other essential items for students having to work from home.

At the time of writing more than £35,000 has been donated by generous members of the community – meaning the school has now netted 120 chromebooks to give to pupils to support home learning.

These will be distributed next week. One parent told the News that previously her daughter, who wants to become a vet, had been forced to use a small phone screen to complete studies.

“This is such a good thing,” said Marsha Phillips-King, whose daughter is in Year Eight.

“She has aspirations to be a vet in the future and we’ve both been worried about her falling behind. This means she can now keep on top of her homework and not get stressed.”

Frankie, a Year 9 pupil who wants to become an engineer, had previously been sharing one laptop between three other family members at home.

“Now I can do all my work at the right time. A massive thank you to all those who have donated,” he said.

This week, education secretary Gavin Williamson announced a scheme where some disadvantaged fifteen-year-olds would be able to borrow a laptop if they don’t already have access to one.

Those who don’t have access to the internet may also be able to get a 4G router, Mr Williamson said. The Principal of Compass School, Marcus Huntley, said he was blown away by the donations and that it would help the school go even further than the government’s promised support.

“Whether it’s Grosvenor Estates, City livery companies like the Curriers and Pewterers, Shad Thames Residents’ Association or donations from individuals, they have all contributed to raising over £35,000 for our pupils.”

“Thanks to their generosity, we can go well beyond the DfE’s laptop initiative, by supporting disadvantaged pupils across all year groups during this period and beyond.

The school aims for students to be able to keep their laptops, “as long as they continue to work hard at school.”