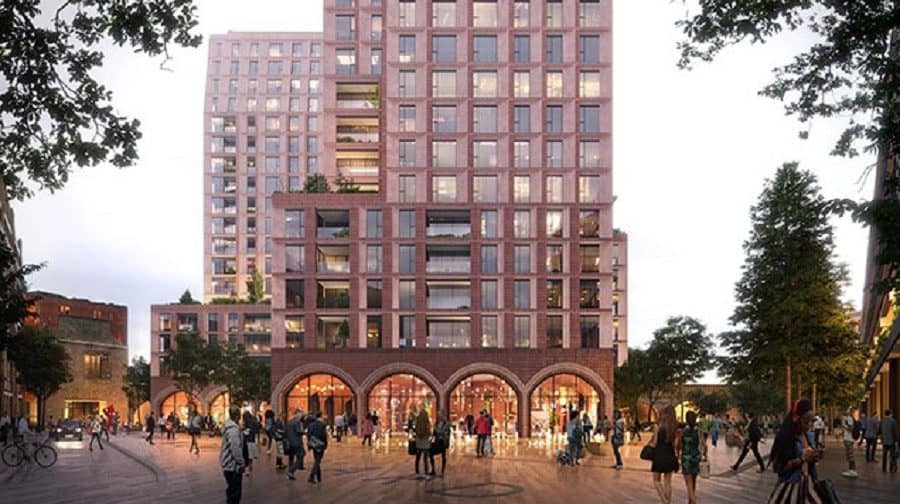 A rejected £500m scheme for Bermondsey’s former Peek Frean’s Biscuit Factory has been given a second chance after an intervention from Mayor Sadiq Khan.

Councillors unanimously refused Grosvenor’s proposals for the site in February in a dispute over affordable housing on the development.

Grosvenor – owned by the Duke of Westminster, reportedly the world’s richest person under thirty – had offered 27.5 per cent of affordable homes.

Now Mayor Sadiq Khan has ‘called-in’ the decision – saying the scheme “has potential to make an important contribution to housing and affordable housing supply.”

Mr Khan will act as the local authority for the application, which he also said may provide “potential educational improvements, employment creation and public realm improvements.”

Under legal powers, he has the ability to ‘call in’ planning applications and approve or refuse them.

A date for City Hall to consider the Biscuit Factory proposals has not yet been set.

The proposals would see up to 1,342 build-to-rent homes, office and retail spaces, and a 600-place secondary school. A draft refusal notice given to City Hall by council officers last month stated: “The development fails to provide the maximum reasonable amount of affordable housing, and the affordable housing offered would be at a cost which would not be affordable to those in greatest housing need.”

Simon Harding-Roots, of Grosvenor Britain and Ireland, said: “We are committed to creating and managing a diverse neighbourhood, and have spent over five years working with the community and others to ensure our proposals reflect their ambitions for the area – today and in the future.

“Continuing this engagement will be a vital component of the next stage in this process.

“Today our site is a largely neglected, fenced off area which provides no homes, facilities, open spaces or significant employment opportunities for the borough.”

He added that Grosvenor would continue work to bring “new homes and the many additional benefits of our proposals” to Bermondsey.

Councillors heard at planning committee in February that the scheme offers no social rent homes, and a couple would need to be earning £30,000 each to rent one of the affordable flats.

But Grosvenor responded at the time it had consistently acknowledged that the scheme could not support social housing, and that the development would help the “squeezed middle being priced out of the borough.”

It had also said a ‘review mechanism’ could be put in place to deliver more affordable and some social-rent homes if the assumptions in its applications were not accurate.

It would be good if the arches in KPF’s original scheme were reinstated, rather than the crap proposed by the ‘Design Review Panel’. The original scheme was a piece of architecture, not a third-rate pastiche.
Both Southwark and London Plans’ space standards list the minimum number of bedrooms as one.
Building Studios may be legal, but they are – by definition – sub-standard accommodation.
Building sub-standard accommodation in new buildings should be avoided.