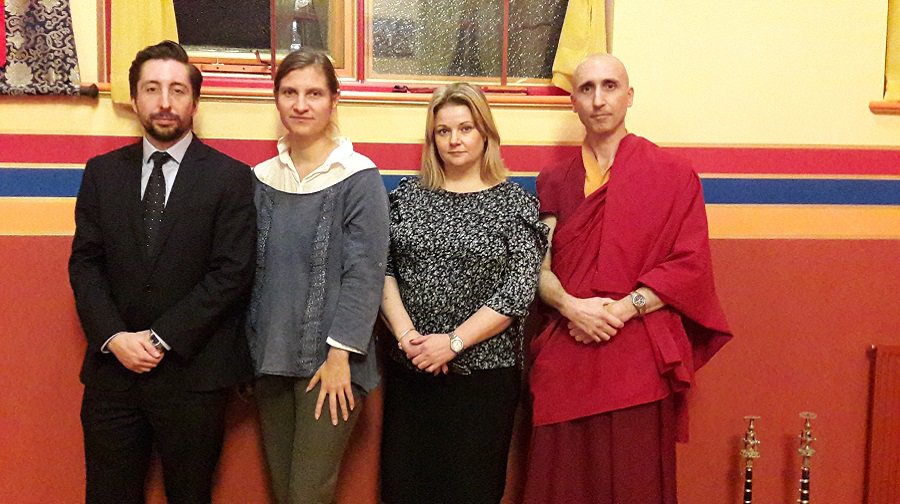 Residents say the final plans for a student development in Bermondsey Spa are still too high, despite the proposals being revised.

CKC Properties and Student Urban Living Bermondsey Ltd have submitted plans to redevelop a site adjacent to the Buddhist Centre, in Spa Road, where they hope to build a residential student block.

The developer originally proposed an eight-storey building with 206 studio bedrooms but changed this to seven storeys, including the ground floor, and lost just one bedroom in the final plans.

Buddhists at the adjacent Kagyu Samye Dzong Tibetan Buddhist Centre and residents living nearby said they believed the building should be at least two storeys lower.

They voiced concerns over the density of the proposed development, which they consider to be excessive and out of keeping with the built density and character of surrounding developments.

They also raised issues over loss of light, lack of privacy, sense of enclosure, and a design “lacking merit” – specifically in relation to its context adjacent the Grade II-listed Buddhist centre – and said the “best outcome is that it gets refused”.

Gelong Trinley, who lives at the Buddhist Centre, said he would like to see a “sensitive design, at least two storeys less, and something in keeping with the surrounding area”.

“This is a really unique place; there are so few places like this where stressed city people can come and learn how to detoxify their minds and relax and how to be at ease,” said the 49-year-old.

“At the moment it’s a really inspiring place and a lot of that is to do with the way the light comes through those windows [in the meditation room] but there will be student rooms with glass fronts looking right through our windows as we are sat there trying to meditate.”

Spa Road street view of the front of the proposed building

Lydia Polzer, 38, who also lives at the Buddhist centre, said she would like to see a gap between the building and the student development to improve privacy.

Spa Road resident Miles Frewin, 33, said he was not “student-bashing” but he did have grave concerns over the density and height of the proposed building, especially towards the back.

“If they redesigned the back portion of the building which would currently cause significant loss of light and removed two storeys so it was in keeping with the height and form of the existing street scene and surrounding development then I think you would probably have a development that was acceptable to the residents,” he said.

Catherine Harris, who has lived in nearby Ockham Building for almost three years, said her main concern was the loss of light.

“That’s a major feature of my flat and one of the reasons I bought it,” said the 39-year-old.

“I’ve got five windows and four are going to be significantly affected, it’s going to completely change the whole character of my home. The feeling of enclosure is going to be overwhelming.”

A spokesperson for CKC Properties and Student Urban Living Bermondsey Ltd, said the proposed development had been ‘carefully designed to mirror the height of existing buildings’.

They said: “From the outset, consultation and engagement has been at the heart of our approach.

“That’s why we listened to site neighbours and local residents by further reducing the proposed building height, conducting a daylight / sunlight report, reducing the building massing and creating a green buffer.

“The height, density and overall design of the proposals have also been guided by a number of design meetings with officers at Southwark Council to make sure that the scheme is in accordance with planning policies.”

This proposal has huge local opposition for very good reasons. The plans and drawings, including the very skewed, inaccurate drawing used in this article, do not properly, honestly show the real scale of the development. A two storey building is being replaced by a seven storey building, and would contain ten times as many inhabitants as the new scheme built on a much larger plot between the Buddhist Centre and the old Town Hall, two listed buildings. It is going to tower three stories above the old library building, a grade two listed building, shading and blocking out daylight/sunlight due to being extremely close. The scale and density of this proposed development is completely out of proportion to the very pleasant residential environment that is now Spa Road.
The developer has not listened to locals at all, it is a whitewash, they are just going through the motions. They removed what they called an eighth storey, which was just a little chimney on the top, and reduced the number of student flats from 206 to 205 – that cannot seriously be called a “reduction” and taking local concerns into consideration. It looks like profit is the sole motivation here, not building healthy communities for the future. Sadly Southwark News seem to print whatever material they are handed without questioning or doing much research themselves.

The image used in the article is very misleading – due to the perspective it makes the building look far lower than it will actually be, as is clear from the full set of plans. The developer has not listened to local needs, rather paid lip service to listening and has done even that through the press. The building in its current design will seriously undermine the quality of life in the immediate area.

On attending one of the meetings with CKC Properties, it was very clear that “the heart of their approach” is not the voices of the local community- but in trying to get away with as much as they can in order to make it a profitable venture. Do not be fooled by their PR— it is their job to make this happen and we have local professionals in the area who are seeing the distortions in their proposal. Additionally, they show no concern for cultivating the atmosphere of sacred space that the Centre and surrounds upholds.This development is going to have a jarringly negative impact on the Bermondsey Spa area and community. Already a diversity of dwellers in the neighborhood and we have a harmonious environment with our regular activity in the Spa gardens as our shared backyard. People come from all over the UK to visit the Buddhist centre for some calm and spiritual connection amidst the daily grind. I hope Southwark Council values the voices of the community who are in strong opposition to this going ahead. I am yet to meet somebody in the area who is pro this. If it happens, they have sold out. Perhaps they can find a way to make it a fair proposal in line with the existing area scale and atmosphere.

When I spoke to one of the reps hired by CKC to run the original consultation, he assured me “that this will certainly need to be a really sensitive development,” and I wondered whether we could be looking at the same picture of a concrete building bearing no relation to its neighbours in either style or size. Nothing meaningful has changed if we don’t count the reduction from 206 to 205 studios or the loss of the 8th floor which they can never seriously have intended – they still plan to cram as many overseas students in as they can, and ignore whatever the local community thinks whilst pretending to listen and “consult”. There is only one thing “at the heart of their approach”.

The developers are lying when they say ‘consultation and engagement have been at the heart of our approach’, what rubbish! We only received notification of what they intended to do a couple of days before their ‘consultation’, here at the Buddhist Centre. They hadn’t approached us at all before then and hadn’t even been in to see what we do here. The even used pictures of our Lamas without permission to promote their project.
By the time of the ‘consultation’ the plans were already at 7 storeys. They knew 8 would be totally out of the question and only started with 8 so that they could say they’ve scaled down so I don’t think it’s fair for Southwark News to repeat this, it’s just clap trap.
The proposal would be 10 times more densely populated than the rest of this part of Bermondsey, this is how out of balance it would be, without the factors of how ugly the design is and how disrespectful to the appearance of the listed Victorian ex-library building it would be joined on to.
It’s also not correct that it will mirror the height of existing buildings. It would tower over the Buddhist Centre by 4 storeys at the rear. The recently built Costrmonger building doesn’t do that and it’s 15 metres away.

The developers’ comments are somewhat perplexing. If the development is ‘carefully designed to mirror the height of existing buildings’, why is the development at least double the size of neighbouring properties? Clearly ‘existing buildings’ does not refer to those in the immediate area – New York or Dubai perhaps? If consultation and engagement has been at the heart of the developers approach, why give local residents only a couple of day’s notice to visit their exhibition? Surely anyone would realise that most people have busy lives and could not attend with such short notice. Why if the developers listened to site neighbours and residents (the vast majority of whom oppose the proposals) are they still going ahead with an overdevelopment proposal which sees at least one poor neighbour losing 60% of natural daylight to his property? How can developers submit a daylight/sunlight report in which they admit their proposal is in breach of planning guidelines on right to light, but hope that this can be overlooked by the planners?. The implication that the scheme is in accordance with planning policies is simply untrue. The bottom line is that whilst residents are happy for the site to be developed, they should not have to live in semi-darkness, lose the privacy of their homes and suffer the effects of ramming over 200 people into one area.

Reducing a development from 206 to 205 units – does anyone really take that seriously?

I’ve just noticed the picture of ‘the front of the proposed building’. Are Southwark News having a laugh printing that? That’s the old library building! People will look at that and think it’s a lovely building, which it is! The proposed building is deliberately hardly visible in this picture because it’s so hideous and out of context.
Please would it be possible to correct what you’ve written and post an accurate image of what the proposal is, from head on?

As someone from outside the area but who regularly uses the Temple, the proposed development next door is just wrong. Its overbearing and to dense. The Developers and their representatives say they are taking into account the views of the locals and the design is not overbearing. It is. The Temple will be overlooked, the potential for noise will increase as will the potential for extra traffic in the area. It will spoil what is a lovely area in Southwark. The main Shrine Room and Café will lose light as a result of the size of the proposed development. It is out of keeping with the surroundings and should not be allowed.