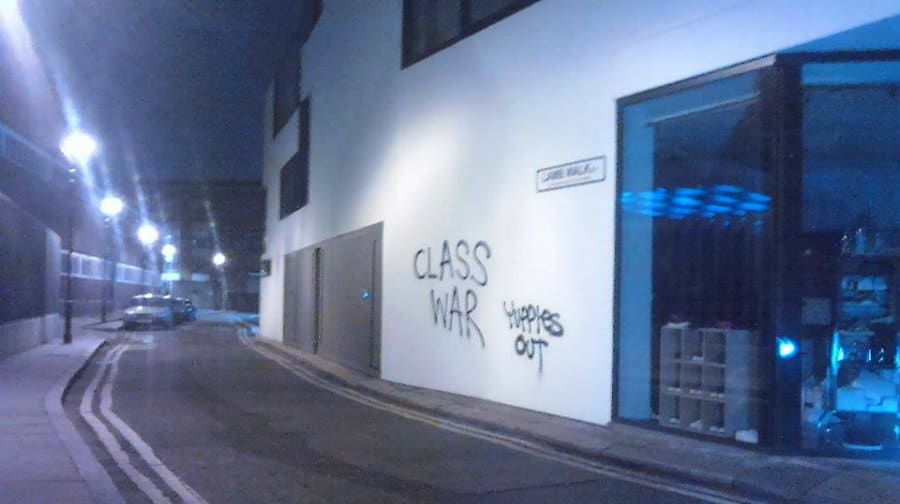 The graffiti in Lamb Walk, adjacent to Bermondsey Street

Bermondsey Street businesses fear that they are being targeted by anti-gentrification campaigners, after protest stickers were posted on shop windows and graffiti daubed on a wall.

Vandals sprayed “CLASS WAR” and “YUPPIES OUT” onto the exterior wall of a block of luxury flats on December 30, with one business owner reporting that stickers supporting ‘F*ck Parade’ had also emerged in the days before.

The group had organised a protest against the Cereal Killer Café in Brick Lane this autumn, which  turned ugly when paint was thrown at the business and windows were broken while terrified customers cowered inside.

A Bermondsey Street business owner, who wished to remain anonymous, told the News that it was feared protestors were set to launch a similar assault on their street.

Before the graffiti appeared, the News contacted F*ck Parade about the stickers and the concerns about a similar march in Bermondsey.

“That’s the first we’ve heard of it.  Plus we don’t do marches, we do parties,” they replied, before adding pointedly: “Bermondsey is long overdue a visit as is most of London.”

Since the graffiti emerged, an open letter purporting to be from campaign group Class War to the owners of the Bermondsey Street-based White Cube gallery has been posted through business letterboxes.

It reads: “We think the White Cube would be an ideal replacement for a winter refuge for the homeless. The Cube is open only from 10-6 daily and not at all on Mondays. This would give ample time to open for the homeless from 8-8 daily…

“If you were to grasp this opportunity to marry art with social responsibility no doubt it would be welcomed worldwide.”

The News contacted the White Cube gallery for comment but did not receive a reply.

London gentrification has gone beyond ‘some roads a little nicer to live in than others’, it’s now literally impossible for even middle income professionals to get by let alone consider growing a future. Unless we all become business owners, CEOs or bankers, we all are sat in the wishing well looking up without a ladder. HOWEVER, I was there (by accident) at one of the little riots these guys started in Camden last year, and they’re not interest in politics of it all, they’re just there for the scrap and anarchy. It’s a shame I, as many share some of their values but express them very differently.

‘they’re not interested in politics of it all, they’re just there for the scrap and anarchy’ err you do know the meaning of the word anarchism don’t you?

Yes, A state of disorder. Clearly wasn’t actual ‘anarchy’ because the police defused the situation in the end, but it’s a commonly used expression, and certainly seemed to be some of the protesters intentions. What I witnessed they started hitting any people, cars, windows in sight with no care of thought for anyone. Kind of gives the impression that they think if we’re not there with them, then everyone else is a multi-millionaire who can afford to have their property or possessions smashed up.

Liar liar, your pants should be on fire.

these hedge fund kids buying propertyin our areas ,are going to love it
..naw seriously
going down the high street meeting the locals is bound to be a right piss take
,the scowling skint youth hanging around the shops /high street
are now being seen with wide grins these days,they think xmas is coming
the pub should be fun also,
once the glasses start flying in what seemed to be a quiet local pub out of the blue a mass brawl by seemingly mates sitting together
i often wonder if they know what theyre letting themselves infor ?
i mean youve a lot of money to buy luxury flat ..of all the nice places to choose
they choose deptford /bermondsy ,,, but why ?
aah the cheapness of it !!
theyll make a profit in few years and move on to surrey or somewhere more upmarket

i suppose its like jail , the minute you walk into the hall/wing everyone looking at the ‘new guy’ wondering if he can be taxed easily or will he fight back ..
but not too worry they’ll soon get used to it ….and sell up ..