Bermondsey Through The Prism Of Postcards 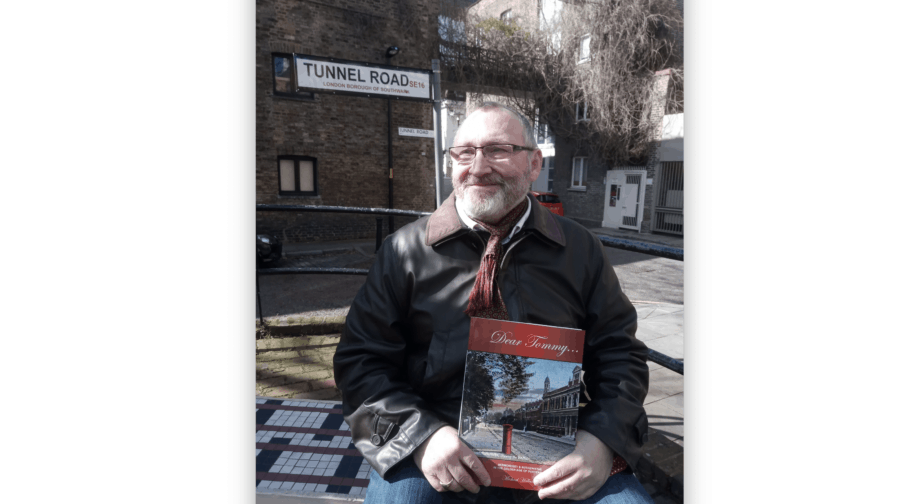 After collecting postcards to and from Bermondsey and Rotherhithe where he was born and bred, Micky Holland decided to write a book about the people who sent and received the postcards he collected, writes Elizabeth Paul...

What made you write a book?

‘After years of looking at the pictures on the front I began looking at the messages on the back and realised there was a lot more interest and drama there… I discovered I had many postcards going to the same people and couldn’t make out why. But then someone told me that collecting postcards was popular a hundred years ago, like collecting stamps, and that I now had some of their collections, collections they had left when they died.’

The collector pushed one of his thick albums of Edwardian postcards across the socially-distanced bench. I flicked through and quickly became enthralled in the old images of places I knew.

‘See!’ I heard. ‘They get inside your head, don’t they?’ And they did. The Blue, where we were sitting, Tower Bridge Road, Jamaica Road, Old Kent Road, Surrey Docks and Southwark Park as I’d never seen them before. He passed another album over: Rotherhithe Tunnel, Tower Bridge, local pubs, churches, schools… ‘But wait until you read the backs’, he said,’ tapping his forefinger on the album. ‘That’s where the stories are!’

I was then given a rundown of how his friend had taught him how to research family histories, delve into army records and church archives to bring to life the people mentioned on the postcards. ‘Without Debra Gosling,’ he emphasised, ‘this book would never have happened.’

The book, Dear Tommy, is a social history of England in the first part of the 20th century, with its focus on SE16 and SE1. ‘These are the years my nan was growing up in Rotherhithe,’ he shouts as a lorry thunders by. ‘My nan walked down those streets just as they looked in those postcards with the horse and carts, and trams… She used to tell me about those old town halls and theatres before they were bombsites… Her mother used to sing in those pubs!’ He became louder with excitement and people were looking. He became aware of the ‘audience’ so turned to them, smiled and proclaimed: ‘I’m just telling this writer about my new book. You can have a signed copy for a few quid – It’s all about Bermondsey.’ Those that stopped moved off again. ‘Children will love it for the pictures and grown-ups will be amazed with the details gleaned from the hours and hours of research I did on it,’ he shouted after them.

What will readers get from it?

‘It’s a real insight into life in the first 20 years of the last century: poverty, disease, lack of healthcare, but you can tell by what people write that there was hope and a little positivity about them. The area had seen a big influx of migrant workers from all over England, and beyond, looking for work, and it was those people who settled here that made Bermondsey what it is today.’

What did you find in your research?

‘There is gossiping and flirting, joy and pain, secret coded messages, upward mobility for some while others fall on hard times… You can see how so many people were connected to the leather and brewing industries that were huge in Bermondsey then; how children were working at a very young age to bring money into the home… Love stories that end in marriage; war stories that end in death; families writing to each other to ask who survived the ‘Zeppelin raid last night’, and the overarching and constant talk about people’s health and illness of a population having to pay for every trip to the doctor, and for every medicine prescribed, in an age before vaccinations eradicated most of the diseases that killed back then.’

That was a bit of a rant.

‘Not really but it does me in when I think about how our people were treated. And it ain’t much different for the working-class key-workers who keep this country running now, the way they’re treated by this Tory government.’

I told him that I’d run out of questions. He didn’t care.

‘Put it this way, those old picture postcards were the closest thing poor people could get to an art collection, so they were treasured. And it’s because they collected them back then that they are still on online auctions now and at postcard fairs… Who is saving their postcards now for future generations?’

‘I am.’ He crossed his arms and stared me down. ‘Cos in hundred years time someone will be buying parts of my collection on eBay for their collection, and might even end up researching me for a book called, Dear Micky.’ He laughed.

So why is the book called Dear Tommy?

His eyes narrowed. He scratched his nose and stroked his beard. ‘Writing this book was a labour of love for me… If you buy it you’ll find out why it’s called Dear Tommy, and it’s worth buying the book just to find out.’ And then he upped and left to buy prawns and winkles at the seafood stall.

I’ve read the book and can tell you that many people will find their families and their addresses in there. It will be a collector’s piece.

Southwark NewsNewsBermondsey Through The Prism Of Postcards