‘It actually looked like a bomb had gone off’ 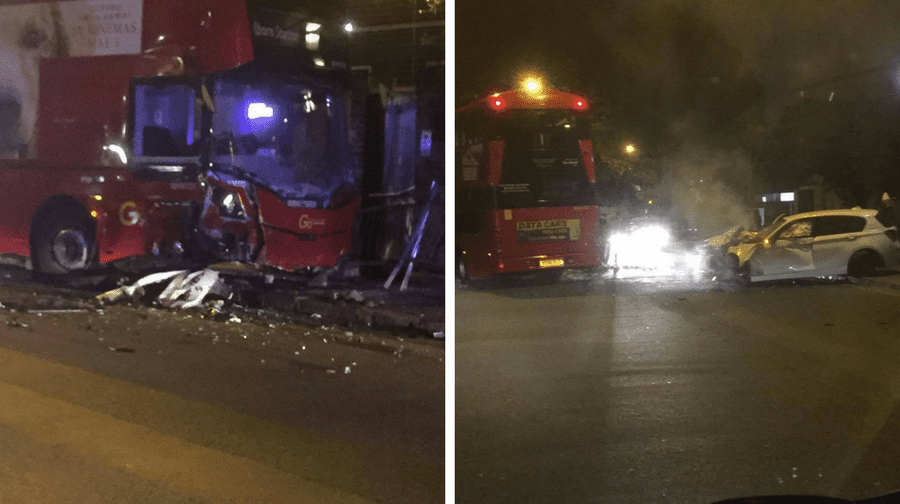 Pictures showing the aftermath of the crash in Galleywall Road (Credit: Theresa Hancock)

A Bermondsey woman has described the dramatic moment she barricaded a road to protect people from a car engulfed by flames after a crash.

Theresa Hancock, 54, had picked up her colleague Terri from Surrey Quays Tesco and was driving home down Galleywall Road when she came across the horrific crash on Monday night, May 8.

A bus and white BMW had collided in the road and passengers were getting off the bus when the car went up in flames.

Theresa wasted no time springing into action and blocked off the road before calling emergency services.

“Initially when I stopped my car there was smoke coming out of the BMW and I noticed there were three people on the pavement side,” said Theresa, who lives off Lynton Road.

“Obviously somebody was badly injured and within seconds flames were coming out of the BMW so my colleague Terri ran over and told them to get away from the car.

“We reversed back down the road and there was a lot of traffic so I just barricaded the street to stop them going up there because you just didn’t know if this car was going to explode. We then called emergency services.”

Theresa, who works on the customer service desk and kiosk at Surrey Quays Tesco, said the fire brigade and ambulance service arrived quickly and the fire was out when police arrived.

“It actually looked like a bomb had gone off, there was so much carnage in the road,” she said. “It was awful.”

Theresa said the police rang her yesterday (Wednesday) morning to thank her for her actions.

“They thanked me for using my initiative and helping and stopping the other cars going up the road because if that car had exploded it would’ve been a catastrophe,” she said.

The driver of the car, a man in his 20s, was rushed to hospital with life-threatening injuries and remained in a critical condition in hospital yesterday.

The passenger of the car, also in his 20s, was taken to hospital but his injuries were not thought to be serious.

Police were called to the scene at 10.23pm on Monday.

London Fire Brigade, London Ambulance Service and a team from London Air Ambulance, consisting of a paramedic and doctor in a car, also attended.

A London Ambulance Service spokesperson said the first paramedic arrived at the scene in less than five minutes.