Bermondsey’s Blue transformed by the summer

The new market will include improvements for traders, as well as a new cinema and multi-arts space, a clock tower and other design changes 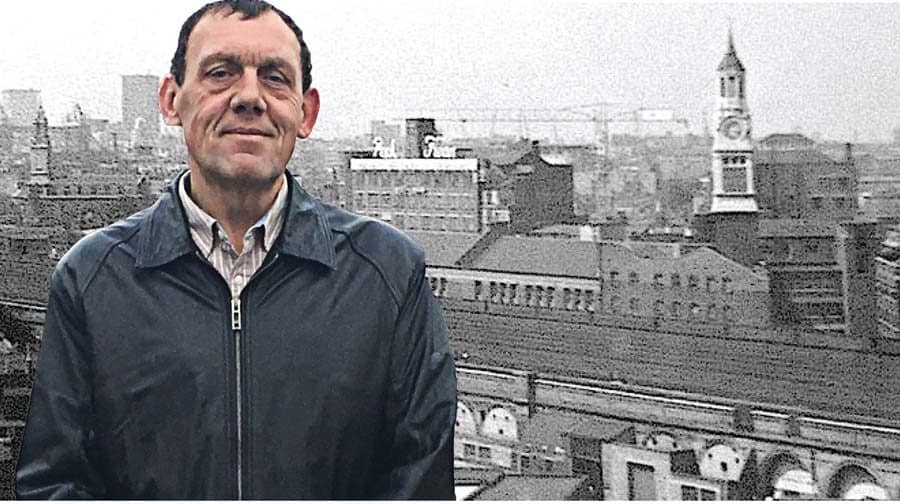 The £2m regeneration of Bermondsey’s Blue market is set to finish on schedule in July after months of work, writes Kit Heren…

All the market sheds are now being renovated, and there will be better facilities for the traders, including canopies and toilets, as well as a new cinema and multi-arts space, a clock tower and other design changes.

“The market wasn’t doing great for a while,” said Russell Dryden, a fishmonger and director of the Bermondsey Blue business improvement district (BID). “None of the facilities worked that well, and it was difficult to get the traders in without them.

“It’s not hard to get traders in general but when the toilets don’t work and you can’t get any electricity, you can’t blame them for not being so interested”. 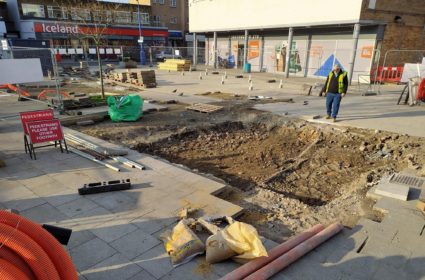 Building work at the Blue

There will also be a market office and better storage for traders, with new electric shutters and new lighting. Dryden hopes that this will encourage traders not to drive to the market. This could help bring down noise and air pollution – improving the overall atmosphere of the area.

Project managers are encouraging people who want to launch their own businesses to use the Blue as a starting place. “If you want to see if your business idea works, this would be a good place to try,” Dryden said. “You can take it off the kitchen table into a real scenario.”

The market will also see plenty of design changes. A project outline shows that the square will be divided in two – the trading area at the front and a social “village green” with more plants and benches at the back.

The village green section will also have a clock tower, harking back to the former tower on the nearby Peek Frean’s factory. The new green oak tower will contain silver discs, a nod to the tin cans first made in Bermondsey in the early 19th century. 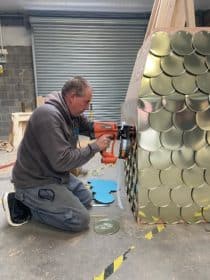 Work on the clocktower

“It’s important for these new developments not to forget the past. You don’t want to be stuck in the past, but a nod is important,” he added.

Part of the problem has been attracting people to the Blue, Dryden said. With that in mind, project managers are getting a new zebra crossing put in to connect nearby Blue Anchor Lane with the busy St James’ Road, and putting in place a cut-through to the market.

The old Thorowgoods furniture shop is set to become a cinema and multi-arts space as part of the renovation of the Blue. The BID is currently holding a survey to gather people’s thoughts on what the new venue should provide. 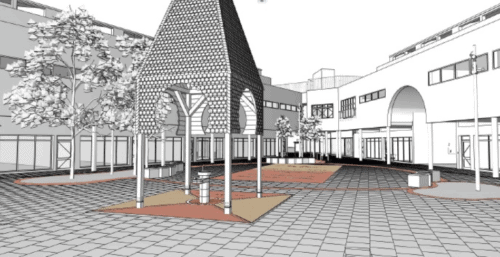 An impression of how the clocktower could look

As part of the redevelopment, some 22 nearby shops will get a makeover, including new paintwork and signage. Several nearby businesses have stopped trading, including the Blue Anchor pub. The future of these sites remains unclear, but Dryden said the BID is trying to secure suitable tenants.

Elsewhere, in October, a new community mural was unveiled in the railway underpass on St James’ Road.

And a new artwork on the nearby John Bull arch is set to be finished in April or May by mural artist Paul Butler, who created the famous Cable Street painting in Limehouse. Painting was due to start recently but had to be delayed because of water leakage problems in the arch.

Take part in the survey on the multi-arts space www.bluebermondsey.co.uk/survey-new-multi-arts-and-cultural-space-in-the-former-thorowgoods-store

I grew up in the Blue and wonder if now the Blue would of been such regeneration priority with thought and consideration to traders and residents as this was needed years ago without the nearby Peek Frean’s developed.

Southwark Council part of that London Plan want that development in Peeks all costs so just hope they put as much interest and investment into the run down Council estates need major overhaul too as those residents should be as much if not more priority as used the Blue decades aiding trade and will continue to do so, bread and butter trade money they call it do they not?