The interview is out on May 5 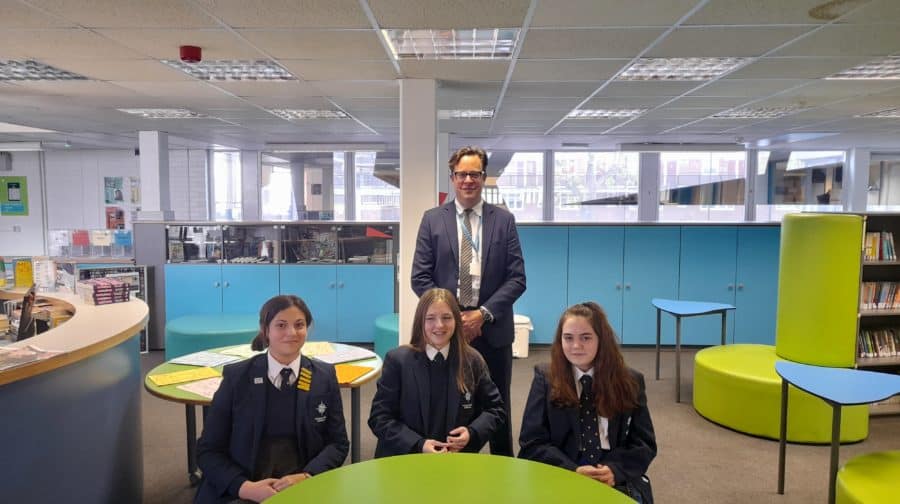 Compass students Greta, Tye and Lottie with teacher Ben May

Budding journalists at a Bermondsey school are taking part in a podcast with a famous British broadcaster.

Year 8 students at Compass School on Drummond Road Greta, Lottie and Tye were interviewed on the podcast hosted by Dame Jenni Murray, the longstanding former host of Women’s Hour on BBC Radio 4.

The girls have a practical journalism class once a week with former Financial Times journalist Antonia Cundy, who is also a producer on Murray’s new show Now I’m Grown Up.

In the podcast, Greta, Lottie and Tye were asked about their experiences in lockdown, the differences between in-person lessons and classes on computers, and how school helps them prepare for the future.

“I learned quite a lot because [Murray] asked me a question that no one ever asked me,” Lottie said. “She asked me what my favourite subject was and what subjects were really important for our future. And it was really hard because I never actually thought about that at the time.

“And I told her that it was a really hard question but eventually I said all the subjects are super important for working out what you want to be when you’re older. You should pick the ones that you think are important and not just the ones your friends are doing.”

Greta and Tye both later told the News they want to be journalists after they finish their education.

“I’d like to be a reporter, not an editor – I want to actually go out and interview people,” Tye added.

“I’ve always sort of been interested in it, since Year 7. When I found out about the journalism enrichment I was really excited.”

Greta said she also wants to be a journalist or an archaeologist, while Lottie wants to join the RAF, or become another kind of pilot.

The journalism class was part of Compass’ “enrichment” programmes – compulsory non-academic lessons for students in Year 7 and 8. As well as journalism, options include singing, drama, film, and even leatherwork.

Ben May, who leads Compass’ enrichment programme, welcomed the podcast as a “fantastic opportunity” for the girls. “I was very proud of the way they engaged and contributed, showing the very best of it means to be [a] Compass pupil,” he added.

The six-episode show was produced by Now Teach, a programme that encourages people to become teachers after finishing another career.

The episode featuring Greta, Lottie and Tye is out on May 5. Also featuring are Rachel de Souza, the Children’s Commissioner, and Sir Kevan Collins, who has been appointed to help schools and students catch up with their disrupted education after the pandemic.

Really excited to listen to the podcast on 5th May. Also feel very privileged that my daughter was chosen to take part