Bermondsey’s Kathleen Chaplin died of coronavirus, suffering from dementia and in lockdown her family were unable to see her in the weeks before her death 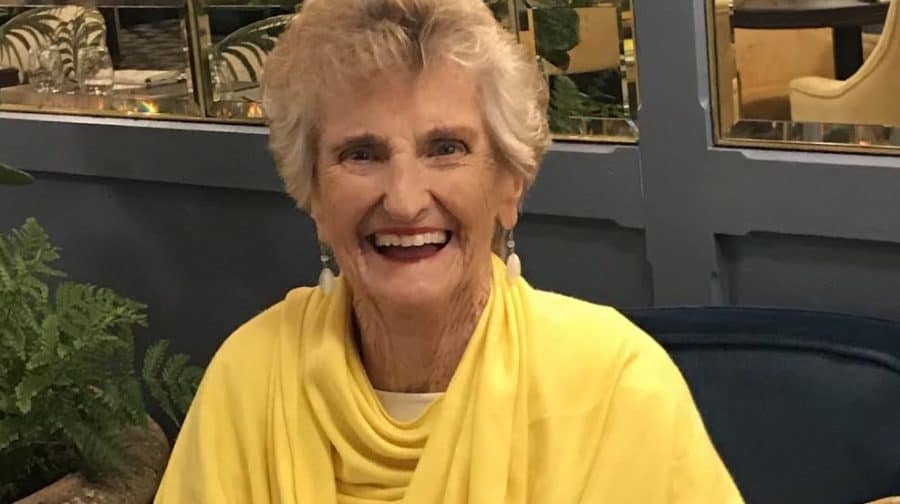 Albert and Kathleen on their wedding day

Bermondsey’s Kathleen Chaplin is believed to be one of three people to die in quick succession in her care home from coronavirus and her family had little to no contact as the lockdown stopped them from visiting.

The 91-year-old had been used to seeing her family since she moved into the Riverlee Care and Nursing Home in Blackheath suffering from dementia.

“I would take mum out every couple of days,” her daughter Sally told the News.

“Even with the lockdown we were popping by every three or four days with grapes and whatever mum needed, but we could not see her as it would just upset her. I don’t think she would be able to understand why we were not coming in. And she was not one for FaceTime or Skype. We tried it, but I don’t think the home were prepared for it; and mum, even with the dementia, was old school.”

For Sally and her brother John the only time they got to physically see her was when she was laid to rest, back in Bermondsey at Albins’ funeral home.

“When she was taken into Lewisham Hospital we called two or three times a day. The nurses would tell mum we would be in later. It was heartbreaking,” Sally said. “I just wanted to be there to hold her hand.”

Kathleen was hospitalised once she got a chest infection and after exactly one week she passed away on April 1.

Born and breed in Bermondsey Kathleen and her family lived on the Tyers Estate, off Bermondsey Street and also Cherry Gardens Street before she moved to Rotherhithe’s Downtown area, where both Sally and John also live.

“Mum lived in St Elmo Road near Bacon’s College before she moved into the home. The care home staff were brilliant with her, the staff at the hospital were also fantastic. I think mum was just very confused by it all and she kept pulling her oxygen off, but they gave her morphine to keep her restful. And since she passed away Albins have looked after her and us lovely.”

Kathleen’s story is not an unusual one as more and more accounts of those dying come to light. The true extend of those passing away from coronavirus in care homes is only now being recorded in the daily figures after a ferocious backlash from the public.

A spokesperson for Sanctuary Care, which runs Riverlee, told the News: “While we would not comment on the medical condition of any of our residents, we understand how worrying these unprecedented times are and can reassure their families that the safety of their loved ones is our absolute priority. We are in regular contact with the Department of Health and Social Care and other care providers to share information and best practice, and continue to closely follow the detailed public health guidance being given to care homes right across the country.”

This week the Health Secretary Matt Hancock made a huge change, announcing families will be able to visit dying loved ones. “Wanting to be with someone you loved at the end of their life is one of the deepest human instincts and it’s a moment that can be with you forever.

“Done right it can help those left behind and it brings comfort to those that are dying,” he said.

During the Downing Street Briefing on Wednesday he said that the death of Ismail Abdulwahab from Brixton at King’s College Hospital affected him deeply.

“I have been really moved and upset by some of the heartbreaking stories of people dying without a loved one nearby. As the father of a thirteen-year-old myself the reports of Ismail, dying aged thirteen without a parent by his bedside made me weep,” he said.

But as new procedures are being introduced to limit the infection and, where possible, give loved ones the chance to say goodbye it is too late for Kathleen Chaplin’s family and others including 34-year-old Terry Coakley also from Bermondsey. His family told the News they wanted nothing more than to give him a cuddle as he fought the disease at St Thomas’ Hospital.

Kathleen’s long life was devoted to her family, says Sally, she enjoyed nothing more than being at home and was totally smitten with her husband Albert, who she met at a house party on Bermondsey’s White Grounds Estate. They got married in 1949 aged 21 and 23 and celebrated their Diamond Wedding anniversary in July 1999. Unfortunately by the December of that year Albert, who suffered from Parkinson’s disease, died.

“Dad was an engineer and worked at Peek Freans Biscuit Factory and mum was a dress maker. Mum was never one for going out, but would pop to the pub, the George on Camilla Road or the Ancient Foresters with dad occasionally. But she loved nothing more than a drive out with her Albie. The car window open, the wind in her hair and off they would go to Eastbourne for the day.”

Kathleen leaves behind four granddaughters and two great grandsons and countless homemade dresses. “I would do the ironing and anything when I was young, as I wanted to get mum to make me a dress for a Saturday night out,” Sally laughed.

“I’d buy the dress patterns, go to East Lane Market to get the material and mum would make it. Whatever was in at the time. She made my wedding and bridesmaid dresses for my me. It was 1974. A long white number with a big hat. She was up on the fashion. She made all my dresses. Sally and her bridesmaids – all the dresses were made by Kathleen Mother and daughter on Sally’s wedding day in 1974

“She was a real family woman, always doing alterations, there was never a plain sofa cushion, she would be quick to put a frill on it. She was always on the sewing machine.

“I said to my brother John today, I hope she is with her Albie now, ‘yes’ he said, ‘off to Westcliff-on-Sea’.”

Southwark NewsNewsBermondsey’s Kathleen Chaplin died of coronavirus, suffering from dementia and in lockdown her family were unable to see her in the weeks before her death