Bermondsey’s Ruby talks for the first time! – “I can’t get over how she knew what the word for ‘milkshake’ was”

Family, friends and strangers helped Ruby’s family hit the £10,000 target after a series of charity events since May 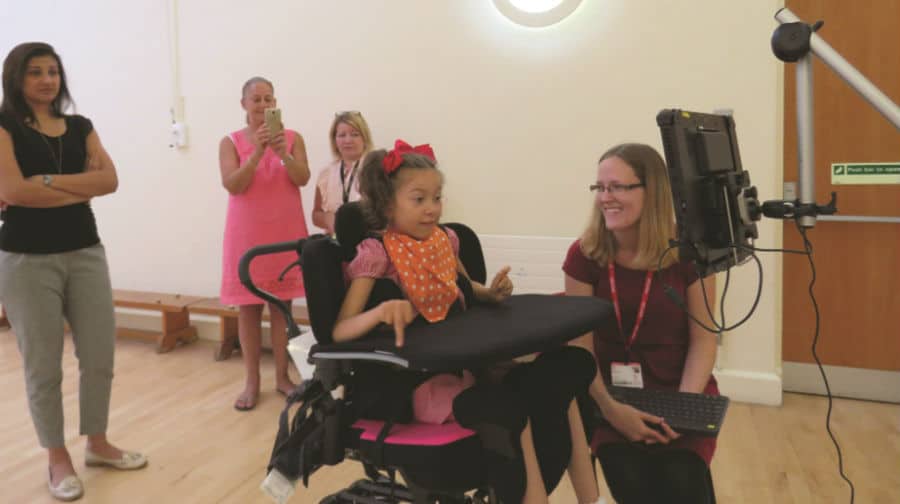 Bermondsey’s Ruby Longman was fitted for the computer that will help her communicate with her family last week, after a fundraising campaign smashed its target in July.

Ruby, 10, suffers from the rare Rett syndrome, which has prevented her from walking and talking since she was a baby, and her family now hope they will be able to talk to her once she is trained to use it.

The new computer made by Smartbox was fitted at Alfred Salter Primary School, where she had the chance to play games and write a story.

Family, friends and strangers helped Ruby’s family hit the £10,000 target after a series of charity events since May.

Timi Samples, Ruby’s mum, said: “I can’t get too excited because I am frightened something will go wrong. It’s taken three years of fighting for it. It just doesn’t feel real. It’s really good!

“I can’t get over how she knew what the word for milkshake’ was. No one has taught her what it is but she seemed to know immediately after a summer of drinking them. It’s just amazing. It just goes to show she’s chatty little girl.

“You see a different side to your child when they start communicating. I am really excited about what she’s going to learn and pick up. Maybe Ruby is more intelligent than people think.

“They have tried communication cards with her before but she doesn’t get on with it very well. But when she put the story together on the computer she did it really fast.

“She’s a bit of a show-off. She’ll be able to do art with the computer too. The school said they can’t wait to hear all the secrets she has heard over the years!”

Ruby took to the device quickly and managed to write the story using pre-recorded phrases.

Daisy Clay, who fitted the computer, said: “In the visit Ruby showed excellent access to the screen using eyegaze.

“She was enjoying playing games in our Look to Learn software, throwing custard pies at faces and playing a xylophone, just with her eyes.

“Games like that will help to teach Ruby the eye gaze skills she needs to use for communication.

“Even in the visit Ruby was starting to explore symbol-based communication pages and choose them using eye gaze. Once she has her device she can start learning to use her eyes to talk.”

How the computer works

The device Ruby will use is the Grid Pad Eye 13 made by Smartbox with the MyGaze Assistive 2 camera, made by Visual Interaction.

The machine works by tracking where Ruby is looking and registering an action if she looks for long enough.

At this early stage, Ruby will start to learn that the choices she makes on the screen will lead to real life responses from those around her.

As she becomes more familiar with using the device, the software becomes more comprehensive, with an adult version allowing the user to select specific words to speak.

Southwark NewsNewsBermondsey’s Ruby talks for the first time! – “I can’t get over how she knew what the word for ‘milkshake’ was”