Around three thousand turned up in support of the #KnivesDownBikesUp campaign 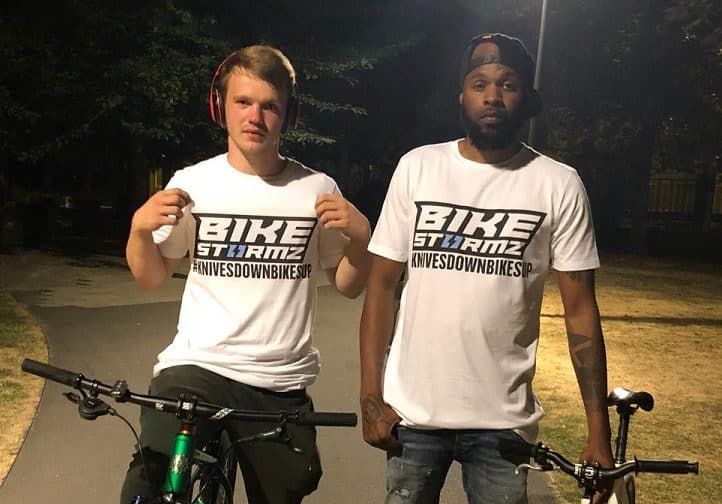 The #Bikestormz ride was organised by 34-year-old Mac Ferrari and nineteen-year-old Jake O’Neill.

It started and finished in Southwark Park, making a 14 mile loop around London on Saturday 11 August, and is part of the #KnivesDownBikesUp campaign that the pair started back in 2015.

“We started it in order to bring young people together in harmony rather than in trouble,” Ferrari told the News. “We wanted to bring them together and see if we could have a ride out where there’s no trouble and ride as one,”

Ferrari and O’Neill met online through a common interest in bikes.

He said: “I started editing motorbike videos for people on Instagram and Jake sent me some clips.

“I saw that it was a sport but that no one had any respect for it, so we met and I said let’s put together a ride out and then we just hit it off.” Thousands of cyclists turned up to show support. Photograph by Adam Corbett.

There were some disgruntled reactions on social media related to traffic disruptions, but eye-witnesses said that overall the ride was well received by the community.

“I know there were some disgruntled Tweets but the majority of people, once they had the message explained to them, they were quite positive about it,” said Inspector Owen Pyle of the Metropolitan Police Service of Southwark who was on patrol during the ride.

Most of the riders were aged eleven to nineteen and, according to Inspector Pyle, some of them had come from as far as Gravesend and Bedfordshire.

He said: “It went smoothly. It was slightly chaotic, 3000 people on bikes anywhere would be.

“But it was great to see so many young people get together for a common purpose.

“We’ve had no reported incidents in relation to any kinds of crime.”

Graham Kings, honorary assistant bishop at the Anglican Diocese of Southwark was taking a walk through Southwark Park when he spotted the youngsters on bikes.

“I thought it was great that they used Instagram to start it and that council and police were involved to give some shape to it, but it’s still run by young people. It lifted my afternoon,” he said.