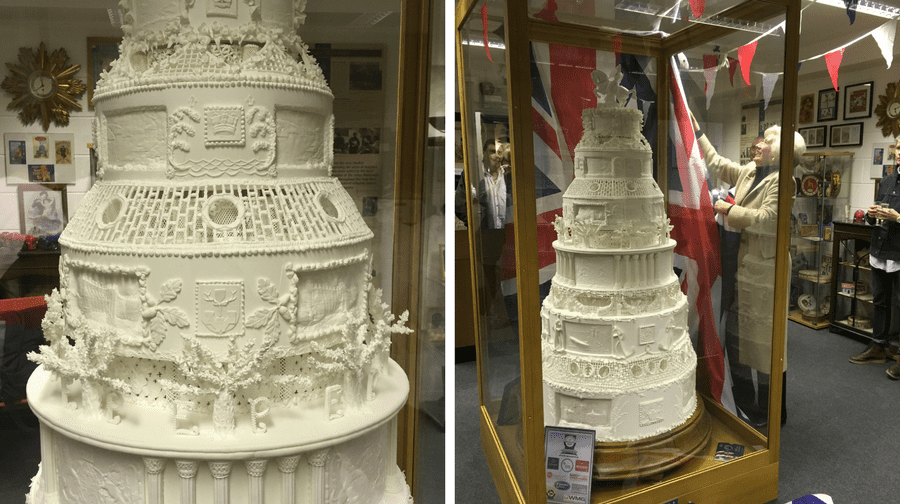 Skilled workers at the Peek Frean biscuit factory, off Drummond Road, made a six-foot tall cake for the then Princess Elizabeth’s marriage to Prince Philip in 1947.

Staff at the factory are said to have been so proud of their creation that they decided to make a full-scale replica of the cake out of icing sugar.

But vandals broke into Rotherhithe’s Pumphouse Museum two years ago, where the replica was stored once the factory closed, and destroyed it.

Members of the British Sugarcraft Guild

Thanks to the Peek Frean Museum’s and British Sugarcraft Guild’s tireless work, another replica was made from scratch and officially unveiled last Thursday, November 30.

Relatives of James Peek and John Carr, who ran the biscuit factory along with George Frean, were in Bermondsey to witness the event as well as members of the Guild and other people involved in the project.

Chris Carr, whose great-great-grandfather John Carr joined the company after it was founded by Peek and Frean, shed a tear at the unveiling.

Speaking to the News, the 66-year-old, who worked in the factory between 1970 and 1980, said: “My grandfather was chairman and my dad was managing director and I used to come round as a tot [to look at the cake] and I’m quite touched by it [the replica] because when you are this high [as a child] it’s an impressive cake and the people who made the original cake made my wedding cake.

“It did overwhelm me because of people doing something for the pure love of doing it when there’s no commercial gain and to a standard of perfection, and also whenever I come back to the factory I feel a tad emotional, it’s a lovely project.”

Mr Carr, who started off as a graduate trainee and later became quality control manager, said he had John Carr’s original marriage certificate which was signed by James Peek, who attended the wedding.

Amanda Davies, whose great-great-grandfather was Francis Peek and great-great-great-uncle was James Peek, said she thought the replica was “absolutely wonderful”.

“I hadn’t heard anything about this from my own grandparents, it was only in researching a book that I found out about the cake and visited it at the Pumphouse Museum,” said the 69-year-old.