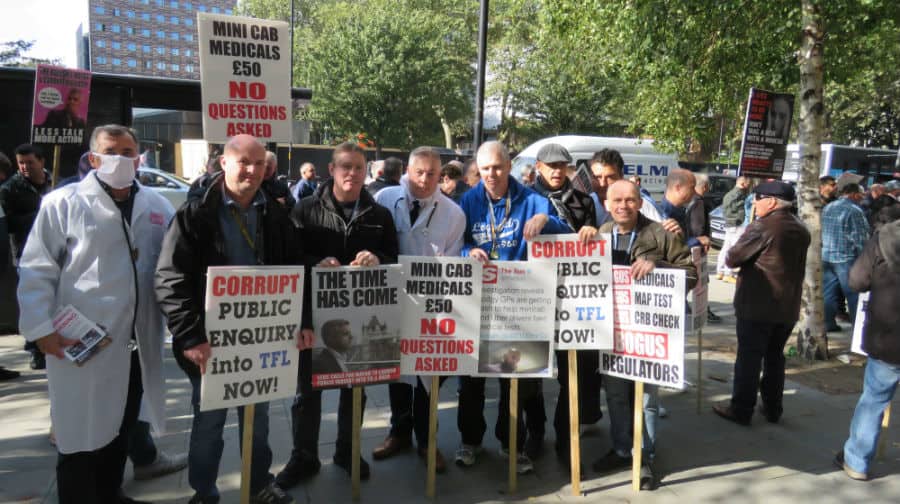 Angry black cab drivers protested outside of TfL’s Blackfriars office this afternoon, over how minicabs are reportedly able to get “fake medical certificates”.

The group claimed that it is unfair how Uber and minicab drivers are allegedly given preferable treatment when it comes to regulation, which is putting the public’s health and safety at risk.

Grant Davis, of the London Cab Drivers Club, told the News that they had a meeting with TfL yesterday about the claims, but were told they “were not able to do anything about it” and that they would “have to wait three years till the licences are up for renewal”.

He said: “But with diseases like epilepsy and heart problems, three years will be too late. At the end of the day, it’s the public’s heath we’re concerned about.”

The protest comes after it was revealed in a Sun investigation that drivers were going to certain GPs and paying around £50 for fake medical records.

Another taxi driver, who did not want to be named, said: “We are getting regulated to the point that we can’t compete while they [TfL] are turning a blind eye to all this.

“We are not allowed any choice in our vehicle or how much we charge. It’s out of our hands.”

Peter Blake, TfL’s Director of Service Operations, said: “We have extensive and regular dialogue with the taxi trade and would encourage the LCDC to continue to engage with us using existing forums.

“The Mayor has recently launched a comprehensive Taxi and Private Hire Action Plan that is aimed at driving up standards and improving safety.  We will work with all industry stakeholders to help shape the implementation of the Action Plan.”