Gladys says she 'lives with no regrets' 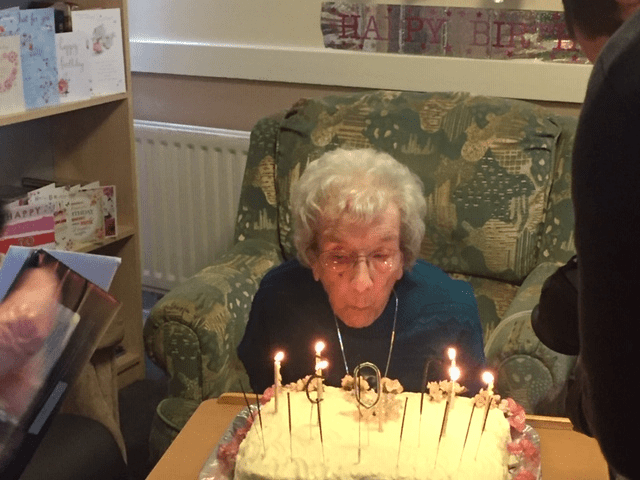 Blowing out her candles

A former Southampton Street schoolgirl who lost some of her hearing during the blitz has turned 105, saying she “lives with no regrets”.

Gladys, who now lives in Fairholme Nursing Home in Cambourne in Cornwall, was born on January 22, 1915, in Camberwell’s Dowlas Street.  She moved south-west forty years ago. Gladys dancing on her birthday

Her mother worked at Scotland Yard as a cleaner and her father worked for Camberwell-based papermaking firm Samuel Jones and Co, which made self-adhesives including stamps. Gladys was one of four sisters; Doreen who sadly died young, Grace who passed away just a few months ago, and Gwen who is still living in Camberwell at the grand age of 99.

Gladys went to school in Southampton Street School and was a regular attendee of exercises classes, but unlike the others she failed to gain her certificates thanks to too much “larking about”. Her favourite activities were dancing and going to the pictures at Brixton Empress.

She later worked in Oxford Street as a shirt machinist, and joined the auxiliary fire service from 7pm-10pm every night where she answered emergency calls.  At the end of her shifts, one of the firemen would drop her home and give her a kiss on the cheek.

Victoria Geddes, the activities coordinator at Fairholme, said: “Gladys has lots of memories of the war. Her mum’s house was bombed and so was hers as they only lived a few doors away from each other. She lost some of her hearing due to it and still hears the noises now.

“One night she had to sleep in Oxford Street station because the sirens were going off.  Despite all that she says she has had a lovely life and lives with no regrets”.