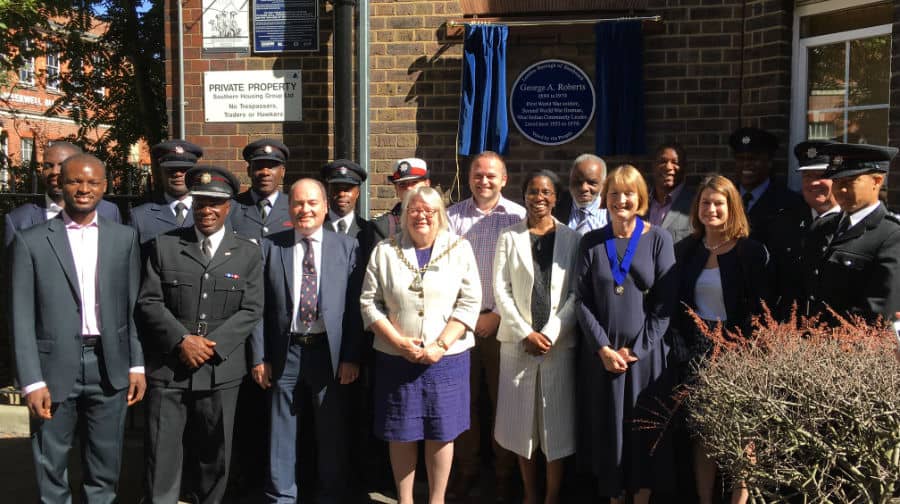 Family, politicians and firefighters honoured one of the first black men to serve in the army and the London Fire Brigade on Sunday, with a Blue Plaque being unveiled at his Camberwell home.

Born in Trinidad in 1890, George Arthur Roberts served in the First World War and went on to become a firefighter throughout the Blitz and rest of the Second World War.

In 1944 he was awarded the British Empire Medal “for general duties at New Cross Fire Station” and for his part as a founder and pioneer of the Discussion and Education groups of the fire service.

Black and ethnic minority firefighters lined up as a guard of honour on the day in Warner Road, Camberwell, alongside the Acting High Commissioner of Trinidad and Tobago, Tedwin Herbert.

Standing at 6’2” George earned a reputation in the Great War for throwing bombs back over enemy lines.

Samantha Harding, George’s great granddaughter, led the ceremony and said she was “overwhelmed” by the turn out.

“It’s emotional and amazing to see so many people out here. I am overwhelmed by it all,” she added.

He was wounded first at the Battle of Loos, and then in the Battle of the Somme. After the war he settled in London firstly living in Peckham and then Camberwell where George and his family lived for almost 50 years.

A former electrical engineer, in 1939 George completed his training with the fire service and in 1943 became a section leader.

In 1931, George was one of the founder members of the League of Coloured Peoples, one of the first organisations to take care of the needs of Britain’s black community.

Voting is still open for this year!

There is still time to vote on which worthy person or place will be honoured with a Blue Plaque for 2016.

The first of four nominations went to Sir James Black OM, the Nobel Prize winning pharmacology who practised at King’s College Hospital in 1984. Black received his Nobel Prize for medicine in 1988 for the development of two major families of drugs: beta blockers, which treat coronary heart disease, high blood pressure, and heart failure, and an anti-ulcer histamine.

Surrey Docks Farm has been nominated for providing a free community resource for Southwark residents of all ages, seven days per week. The farm site has a rich history, once part of a great shipyard.

Thirdly, Gertrude Lawrence was born at 6 Bath Terrace, Newington, in 1898. She is most famous for the final stage role as Anna in Roger and Hammerstein’s original production of The King and I.

Votes for one nominee can be made by email to admin@southwark.org.uk or news@www.newsatden.co.uk or via one of the designated voting boxes at your nearest library by the end of  September.