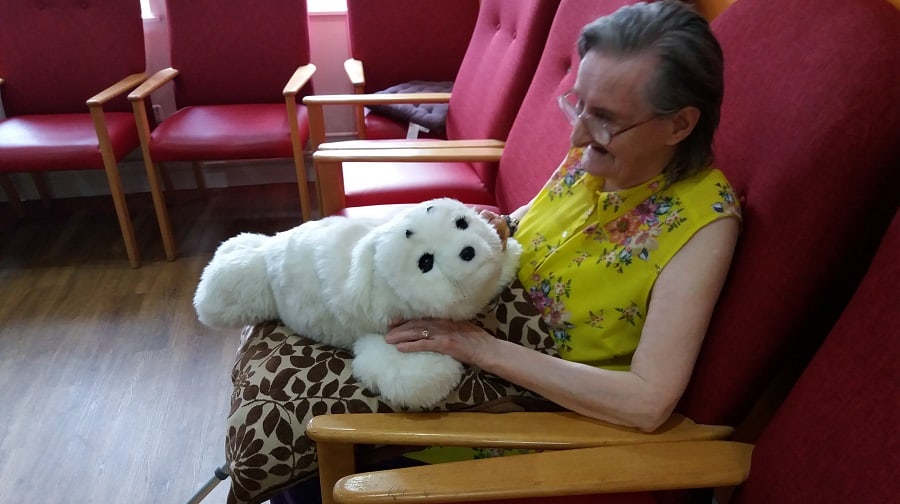 A fluffy robotic animal has been given the seal of approval by elderly day centre users.

Age UK Lewisham and Southwark has been using an android seal called PARO to work with older people at its Stones End day centre.

The Borough centre became the first in the UK to use the device, which has proven stress relief, relaxation and motivation benefits, particularly for people with dementia.

Just as cats and dogs are more commonly used as therapeutic companions for older people in care settings, the white fluffy seal was specially designed for places like hospitals and care facilities.

With tactile light, audio, temperature and posture sensors, the seal can perceive people and its environment – it senses being stroked and can recognise the direction of voice and words, such as its name, greeting and praise.

By interacting with people, PARO responds as if it is alive, moving its head and legs, making sounds, and showing the person’s preferred behaviour. It also imitates the voice of a real baby harp seal.

The centre managed to buy the device thanks to funding from Aberdeen Asset Management.

Jack Leahy, deputy manager of the centre, said: “[The robotic seal] has become a popular resource and is part of a range of therapies and activities that our centre users enjoy.

“Our aim as a charity is to reduce social isolation among older people and in our area, 60 per cent of whom report feeling alone. For some, coming to the centre is their only outing in a week.

“We’re very grateful to receive the support of Aberdeen Asset Management which is helping us to recruit a wide range of volunteers who contribute hugely to the welcoming and fun service we provide for our members.”