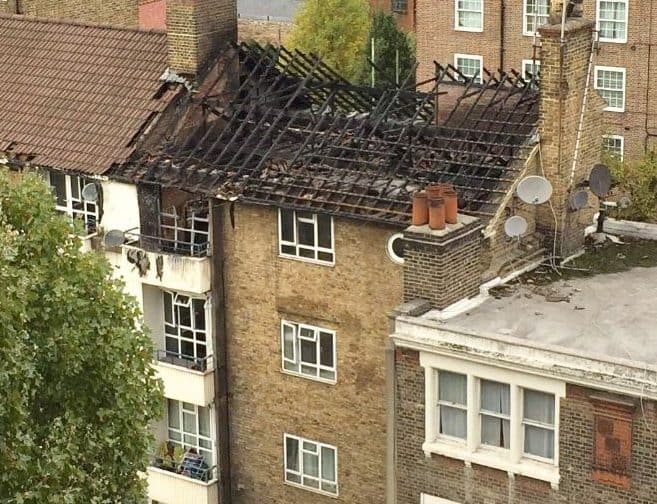 The flat was gutted by the blaze on Saturday afternoon Image: David Noakes)

A flat in Borough was destroyed in a blaze this weekend.

Six fire engines were called to reports of a flat fire on Bittern Street at 15:10 on Saturday.

No-one is reported to have been hurt in the fire on the third floor of Bittern House while forty firefighters managed to get the blaze under control at 17:20.

Part of the roof of the four-storey block was also damaged while the five-room flat is said to have been gutted by the blaze.

Neighbouring flats are said to have largely escaped fire damage. The majority of residents have now returned but the burned out flat and one below are currently uninhabitable Image: David Noakes

Kind-hearted staff at the nearby Charles Dickens Primary School opened its doors for residents to shelter inside during the evacuation, while generous flats nearby handed out clothes and blankets.

Other Good Samaritans bought fish and chips for residents stranded outside of their homes.

The News understands that the majority have now safely returned, while the inhabitant of the destroyed flat has been staying with family and friends.

Ward Cllr David Noakes, who visited the flats on Sunday, said: “There’s only one flat that’s really damaged from the fire, but a number of the flats below have had significant water damage unfortunately.

“I visited all the residents on that side of the building to make sure that some of the immediate issues are picked up.

“The last thing they want to do is go through the council’s main switchboard to try and find the right department, so the council needs to makes sure there’s a single point of contact.”

A spokesperson for the London Fire Brigade confirmed the incident and said: “The cause of the fire is under investigation by the Brigade and the Metropolitan Police Service.”