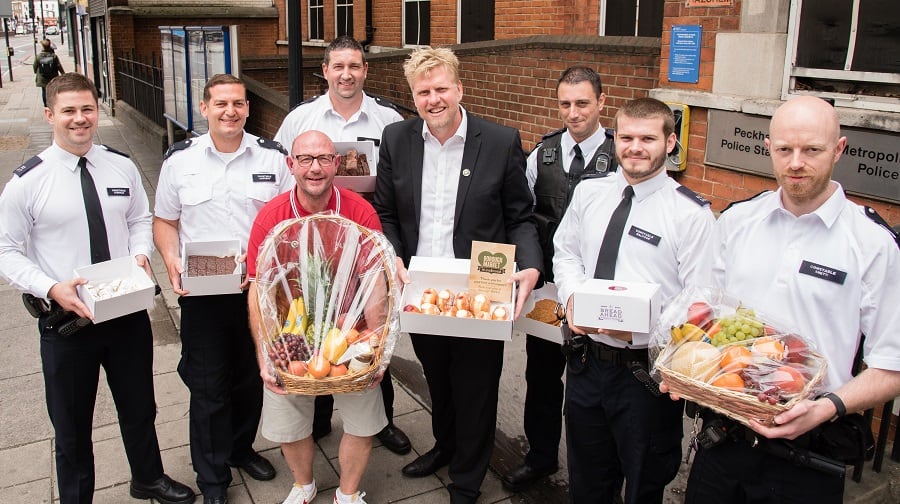 Traders at Borough Market visited police and fire stations across London with gifts of market, to thank front line staff for their support during the June 3 terror attack, Katherine Johnston writes…

Grateful traders arrived at Southwark and Peckham police stations yesterday carrying baskets of fresh produce to thank the local emergency services for their bravery. In an emotional meeting, representatives of the affected traders were pictured shaking hands with the first responders on the night of the attack.

“We have been overwhelmed by all the support we’ve received from the community since the attacks,” said Paul Wheeler, who runs a fruit and veg stall, “If it hadn’t been for the quick reactions and bravery of the police on the night of the terror attacks, things would have been even worse. As market traders, offering food and drink feels like a fitting way to show our gratitude.”

Eight people were killed and a further 48 injured when three terrorists wearing fake suicide vests ploughed a hired van into pedestrians across London Bridge before entering Borough Market on foot and attacking visitors with knives.

The emergency services’ response has been widely praised, with police arriving on the scene and shooting the attackers on sight within minutes.

Borough Market’s Managing Director, Darren Henaghan said:  “As we are slowly getting back on our feet, this is our way of saying thank you to the members of the emergency services who put themselves in harm’s way.”

The gesture comes a time when many traders are still in limbo waiting for insurance pay-outs. Borough Market was closed for eleven days in the aftermath of the attack, causing an estimated loss of £1.4 million to local businesses. Due to a 21-day wait for the government to officially classify the attack as “terrorism”, traders were unable to make their claims.

Bermondsey and Old Southwark MP Neil Coyle has led calls for the government to take direct action, previously telling the News “if we don’t want the terrorists to win, we need the government and others to step in and do more now”. On July 13, Business Minister Margot James affirmed her commitment to “call in” insurance providers but fell short of making a direct offer to traders.

To date, a public fundraising appeal to support affected traders has raised more than £100,000 – double its initial target. High profile visitors including HRH Prince Harry and PM Teresa May have visited the market to show their support. To donate towards the trader support fund, visit the JustGiving appeal page.