Just five weeks on the toddler is still in hospital, but is already “running and jumping” around 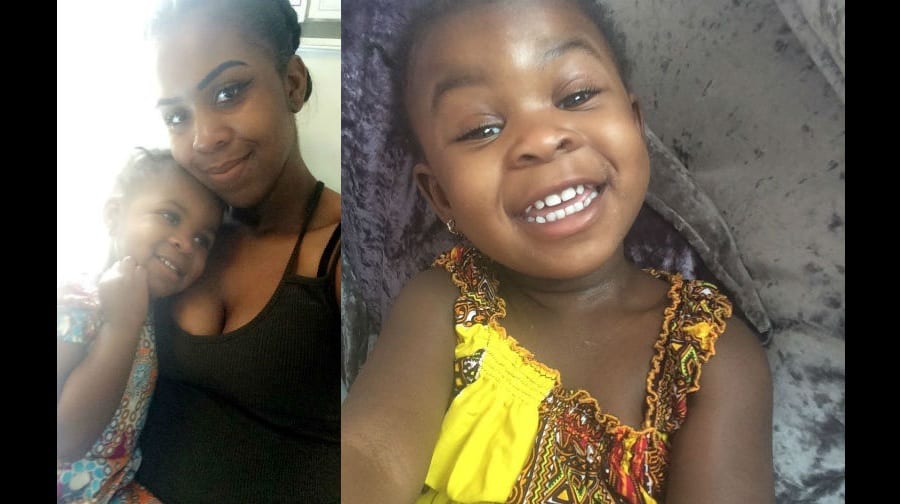 A Borough woman whose toddler fell out of a fifth floor window on a hot summer’s day has warned that it “could happen to anyone”.

Philippa Boamah, 22, left her two-year-old daughter, Aaliyah, in their Lancaster Estate, Webber Street, living room for a few moments as she was cooking last month, during which time she managed to climb up onto a window sill and fall through the window.

Aaliyah miraculously missed opened windows and a satellite dish as she fell, and remained conscious as she hit the floor.

“There was a man down in the park who was there when she hit the ground. He was just a normal guy. He said ‘no one touch her’ otherwise her bones would be messed up,” said Philippa.

“When she was laying on the floor she was just saying ‘mama, mama’.”

The view from the window

In the brief time Philippa was in the kitchen making food, Aaliyah had managed to lift herself up onto a radiator under the window, and use a nearby door handle to get onto the ledge.

“I had opened the window because it was so hot. I went into the other room to make her food and as soon as I put the chips in the oil I heard my mum shout ‘Philippa where’s the baby?’. My mum usually doesn’t shout so it was weird.

“When I came out of the kitchen it was really quiet, which was worrying as you would normally hear her running around and making noise. I then went into the room and saw the window wider than I left it and just thought ‘oh my god’.”

Philippa and her mum immediately rang emergency services as they ran downstairs, and an air ambulance flew to the scene. Aaliyah’s injuries weren’t serious enough to use the helicopter, however, and she went to hospital in a normal ambulance.

Aaliyah had suffered injuries to her spine and legs and received surgery soon after she arrived. Just five weeks on she is still in hospital, but is already “running and jumping” around.

Philippa said: “The scary thing for me was the surgery. Knowing that she’s going in there and being cut up.

“She’s such an energetic girl. Always running around and going up and down the slide in the park, making noise and laughing. She’s really naughty too.

“She’s just injured her spine. Her left leg has a lump on it which means she can’t move it very well, but she is walking.

“It could happen to anyone. When I was in hospital I met another mother who said to me how her son had fallen off a balcony. It can just happen so quickly.”

Aaliyah’s quick recovery was helped by the NHS’s quick thinking, and was praised by Philippa for their ‘high quality care’.

“She’s running and jumping around now and ordering the nurses about. I am just so happy and it’s a massive relief.

“We’re now waiting for Stanmore [hospital] to straighten her up which will help her in the long term.

“Since this has happened I have realised that the NHS is really good. They give you a high quality of care. When they said she was in intensive care I thought there would be lots of machines, but there were so many nurses waiting there for her.

“I thought we would have to wait in a queue. They took care of her and did everything they needed to do and did their checks quickly.

“They managed to negotiate when they would do the surgery fast too. They do give people attention. They were all staring and I felt away but in the end I felt safe.

“They had their eyes on her all the time. They came to check on her every two minutes. I am grateful for the NHS. It’s a very high quality service.”

Aaliyah has now started physiotherapy to help her regain her strength.