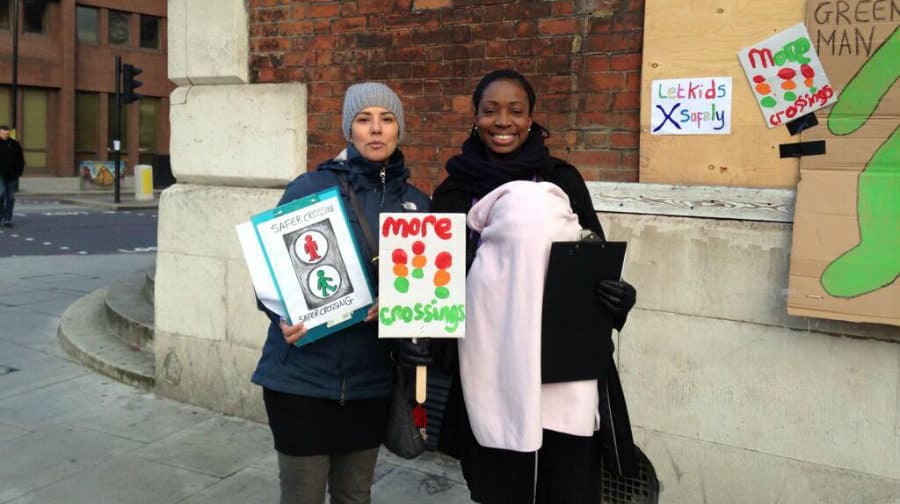 Community groups SE1 Safer Roads and Borough Babies organised a campaign in 2013 which pushed for safer road crossing across Borough High Street – particularly along the main routes between the Rockingham and Tabard estates and the cluster of primary schools around Borough Station.

A petition put forward by the campaign group was signed by over 1,500 people, prompting Cllr John to declare in council assembly in January 2014: “Having spoken with them, Cllr Hargrove and I are pleased to give them a commitment that this authority will deliver those crossings within the next twelve months.”

Two years down the line, campaigners are dismayed that these plans seem to have hit a red – or at least an amber – light.

Victoria Diamond, of SE1 Safer Roads, said: “At the moment you regularly see parents and children having to take their life in the hands where there is no pedestrian phase, scuttling out of the way of juggernaut lorries.

“We were delighted when the council leader Peter John gave us his personal promise in December 2013 that the council would install pedestrian crossings at both spots within twelve months – and made it an election pledge.

“Work now seems to be stalled, and lots of local parents are really disappointed.  Road safety is a huge concern for lots of people and we really hope that this promise will be delivered.”

Lib Dem Cllr Adele Morris added her disgust that the crossings had been so delayed, saying that the council should not make promises they cannot keep.

In response to the complaints about the delays, Cllr John said: “Along with local residents, we absolutely want a crossing on Borough High Street which is why we have been pushing TfL to deliver it. It has taken longer than we would have liked, but the work is now underway to make Borough High Street safer for pedestrians and all road users.”

A spokesperson for the council revealed that crossings at St Thomas Street and Trinity/Great Suffolk Street are scheduled to be completed by next month.

The crossing in Marshalsea Road will be implemented next year, while another crossing in Newcomen Street has been “slightly delayed” with no completion date timetabled.