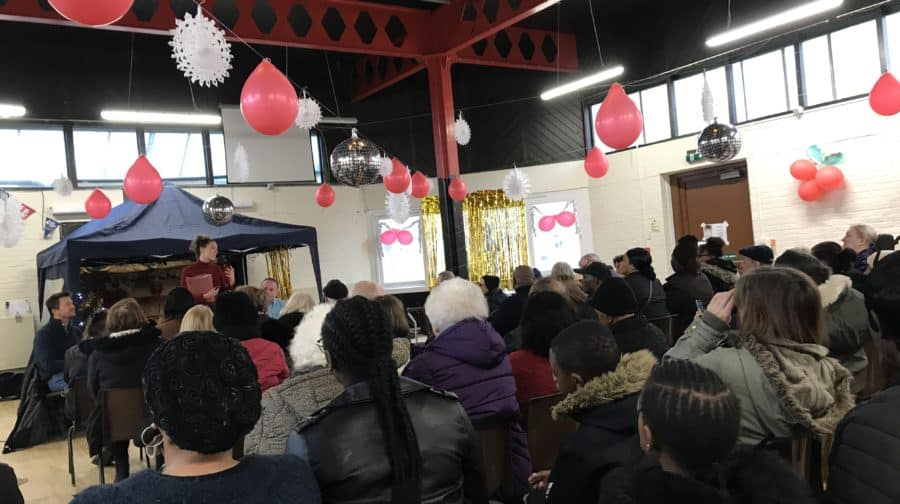 A public meeting at Rachel Leigh Community Hall before Christmas, about the planned closure

Brandon estate residents have been left outraged at the news that their only GP surgery is set to close by the end of March when its GP retires.

At a packed public meeting held at Rachel Leigh Community Hall before Christmas, on Saturday, December 21, attended by the News, angry patients challenged the decision.

One heckler shouted “it’s social cleansing”, while another said “it’s all about the money”.

They were addressed by local MP Neil Coyle and Southwark councillors, who are lobbying to keep the surgery open, and Dr Jonty Heaversedge, the Southwark Clinical Commissioning Group’s representative.

Cllr Eleanor Kerslake said “Since letters went out asking people to re-register, every day people have contacted us councillors about it.”

Patients have been told the practise is likely to close by the end of March, after 43 years serving the community, and they will need to register elsewhere.

After just one week a petition against the closure was signed by 1,300 people.

The CCG is the body which commissions health services for the entire borough, did not chose to close the surgery but has decided not to proactively seek a new practice to take it over, saying the current set up is unsustainable.

Although this surgery is within a council-owned building, the local authority has no say over the decision.

Cllr Evelyn Akoto, cabinet member for community safety and public health at Southwark Council said: “We are aware of the planned closure and the reasons why.

“We know this is concerning for our residents and we are working closely with the CCG as it goes through the process to decide the best options for GP provision in the local area.

“We are committed to ensuring, whatever the outcome, that all residents will have access to the same high quality care as we do in all parts of the borough.”

Dr Heaversedge said the key issue with finding another GP to take over the practice is that it has a comparatively small list of patients – around 3,000 – which makes it less financially viable and unlikely a provider would be interested. Most practices have at least 6,000 patients now, he explained.

But so far, he admitted, the CCG has not taken any proactive steps to find a potential doctor or group to take over the surgery choosing not to put out to tender.

“A committee was put together to look at if they can find a GP practice to take on Maddock Way, and they found it was “highly unlikely” but we need to do more analysis.”

MP, Neil Coyle, addressed the crowd saying the CCG had known Dr Sinha was due to retire for six months but had failed to act.

“The CCG has to consider outcomes for patients, and I’m not convinced they have taken that on in this decision,” he said.

Heaversedge’s denial of this claim – “I do not know that we have known about this for six months” -was rubbished by Coyle who pointed out that they knew his age and retirement date.

Key points of contention were the ongoing serious youth violence on the estate and how it has affected patients’ mental health, and the fact nearby surgeries have waiting lists for non-emergency appointments of up to four weeks.

Residents were also angry that new healthcare provision is being included in the redevelopment on Manor Place, near Elephant and Castle, while they are set to lose out.

Another asked: “Why are they building a new one at Manor Place and not keeping this one open? Because they want to build luxury flats and a new medical centre for posh people”.

Another angry resident cried out shortly after: “if it ain’t broken don’t fix it!”

One woman said the money being spent on the estate was going into the wrong places: “£70,000 [the council] are spending on the Jack Hobbs Club, what are you doing there? No one is using it!”

After a request to comment from the News, a Southwark CCG said: “We are committed to continuing to listen to patients’ concerns and exploring all possible options to address these, the CCG has hosted and attended a number of events during the past two weeks to ensure that this happens. “

The spokesperson added: “In the meantime, it is important that patients understand that they will need to register themselves with a new practice; we can provide support for patients who need assistance with this, and are working with the practice to identify patients who are frail or less mobile.”

Another public meeting will be held on January 28.