Another unexploded bomb found in Southwark

The explosive was found at the former site of Fisher FC's stadium. 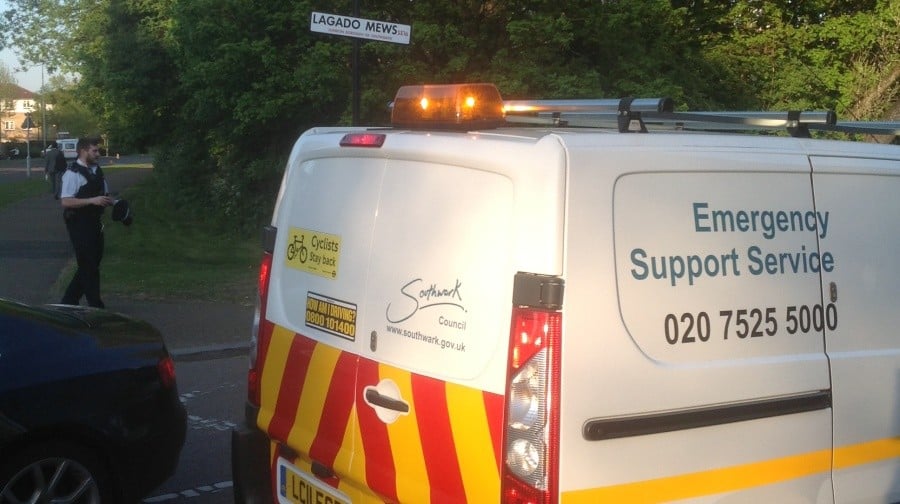 An emergency support vehicle at the scene.

An unexploded World War Two bomb was discovered on the old Fisher football ground last week, less than a month after Bermondsey was thrown into chaos by the discovery of an unexploded WW2 device.

The device was found on Thursday in Salter Road at the site of the former Surrey Docks Stadium, which is now being turned into housing. Police, fire and ambulance crews arrived at the scene just after 5pm.

Unlike the explosive found at Grange Walk, the device caused little disruption other than temporary closure to a section of Salter Road and disruption to the C10 and 381 bus routes. A bomb disposal unit arrived at 6pm and the device was quickly taken to Greenwich. Police cordons were re-opened within an hour.

A police spokesperson said the bomb was ‘1 foot long, 4 inches in diameter and shaped like a bullet’. Paul Noblet, a former Lib-Dem councillor, said: “I was out canvassing for Simon Hughes with Cllr David Hubber when we stumbled across the whole scene. Police were putting a cordon in place and told us a suspected unexploded bomb had been found. We couldn’t believe it!”

In the aftermath of last month’s Bermondsey bomb scare, the News called on Southwark Council to re-consider its planning policy to place a greater emphasis on on-site bomb-detection. Council Leader Peter John said that as it was a ‘very unusual occurence’ no change would take place, a stance he stands by. He said: “I think the way the emergency services handled the bomb last week was fantastic. There was no need to evacuate residents, and other than some impact on traffic, the whole episode passed without drama or disruption. Clearly, all the necessary processes are in place to calmly deal with such, thankfully unusual, situations.”