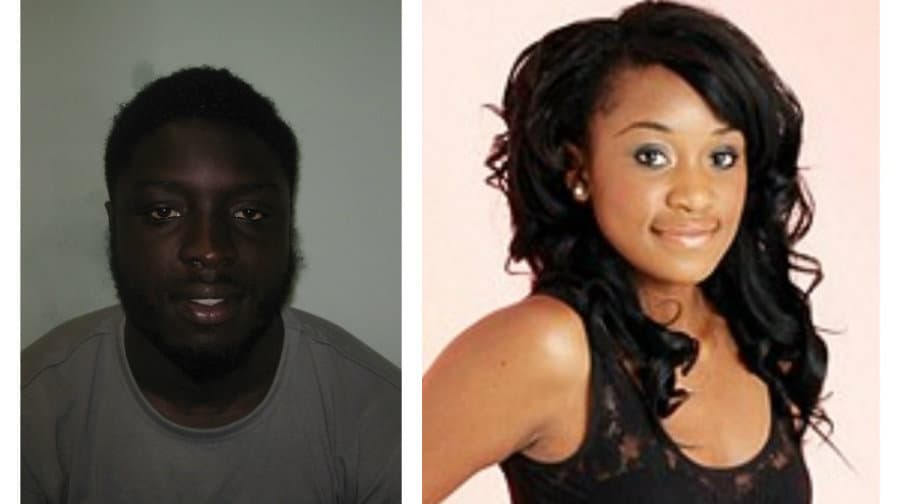 An unrepentant teaching assistant who killed his unborn baby by stamping on his heavily pregnant ex-girlfriend’s stomach was jailed for life today.

Kevin Wilson, 22, recruited a 17-year-old accomplice to launch the ‘cowardly, vile and callous attack’ attack when Malorie Bantala refused to terminate the pregnancy even after he took her to an abortion clinic.

The pair ambushed the 22-year-old Marks and Spencer shop assistant on June 15 last year as she made her way home from a friend’s house where she had been planning a baby shower.

The pair, wearing motorcycle helmets, kicked and stamped on her stomach in a sustained two-minute attack as she curled into a ball crying out ‘my baby’ in an assault so vicious she broke two fingers trying to protect her unborn son.

Brave Miss Bantala was able to identify Wilson from his eyes as well as his hulking frame, distinctive tracksuit and Nike trainers, and she screamed ‘I’m going to kill you, Kevin’ as he fled the scene before making his getaway on the teenager’s scooter.

She gave birth to a still born baby boy by emergency Caesarean section after the attack, which took place near her home in the Pelican Estate in Peckham, and needed life-saving surgery herself.

The emotion was too much for Miss Bantala when Wilson and the 17-year-old were convicted last year and she banged on the glass dock as family members dragged her from court wailing: ‘I’m going to kill you, I f***ing hate you, f***ing drop dead.’

But today, Miss Bantala sat in dignified silence dressed from head to toe in black just yards away from Wilson, who was wearing a bright purple collared sweater and blue tracksuit bottoms.

In front of a packed public gallery, Judge Mark Lucraft QC jailed Wilson, a former teaching assistant at Octavia House School in Walworth, to life imprisonment with a minimum term of 16 years for causing grievous bodily harm with intent and child destruction.

The 17-year-old, who has the mental age of an eight-year-old, was jailed for ten years with an extra four on licence for the same offences.

The judge said: ‘The risk posed by anyone prepared to do what you did to a mother and her unborn baby is self evident.

‘The kicks and stamps were deliberately targeted to her stomach in order to destroy her unborn baby.’

He told Wilson: ‘You were the father of the child and as such had a responsibility to ensure the continued well-being of mother and baby.’

Shameless Wilson showed no remorse in the dock and his barrister, Tyrone Smith QC, said: ‘This defendant, whilst aknowledging the verdicts of the jury, maintains he never commited the offence.’

Prosecutor Jonathan Rees QC told the court: ‘It was plainly a despicable and wicked thing to do.

‘It makes you wonder what sort of world we live in, any normal person would be disgusted by this attack.’

The court heard she may never be able to have children, while Wilson’s current girlfriend had an abortion after becoming pregnant with his child.